Another Cycling Death as Met Police Stop, Warn and Fine 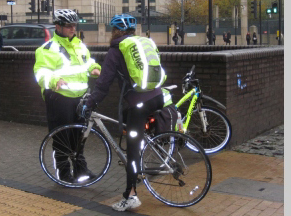 A bicycle rider in his sixties has been struck and killed by a lorry in south-east London’s Camberwell – he was the sixth cyclist to be killed in just two weeks. Fourteen cyclists have died in London this year – with nine of those being struck by HGVs. Despite new rules on safety equipment being installed on goods vehicles, there are calls from many lobbyists to ban lorries in London during the rush hour.

Meanwhile, the London Ambulance Service reported that at 4:00p.m a man was treated for a head injury after his bicycle was involved in an RTI.

In addition around 100 cyclists were stopped and given safety advice by officers from the MPS Safer Transport Command, where there were concerns about their behaviour - for instance cutting corners and wearing headphones while riding.

The operation began at 7:00a.m. and concluded at around 11:00p.m. It saw 15 fixed penalty notices totalling £2,300 being issued to lorry drivers for 15 offences, including driving more hours than they are legally permitted to without break and having vehicles that are not fit for the roads. In one instance a lorry stopped on Vauxhall Bridge Road was found to have a dangerously over-inflated tyre that left it unfit to continue its journey.

Cars were also pulled over where necessary and drivers issued with fixed penalty notices for offences such as crossing advanced stop lines illegally, having tyres not fit for the road and having defective brakes.

Cyclists who were stopped were advised of a range of safety measures they can take, such as wearing helmets and high visibility jackets. Bikes must be fitted with white front and red rear lights and with a red rear reflector.

On Vauxhall Bridge Road, many cyclists were stopped as they attempted to cut across the pavement to enter the busy flow of traffic rather than a designated cycle entry point at traffic lights.

Chief Superintendent Glyn Jones said: "We held this operation in busy areas where lots of cyclists and lorries share the roads during rush hour. This is a combination which has the potential to result in collisions if road users don't take adequate care. Our objective today was to raise people's awareness of the safety measures and to check that lorries and their drivers were fit to be on the roads.

"While today's operation focussed on cyclists and lorry drivers, our overall message goes to pedestrians and other drivers too. Our message is do everything within your power to be safe on the roads.

"We are not looking to blame one particular road user - we are here to urge everyone on the road to take the very best of care for the sake of themselves and others."

Following the latest fatality, chief executive of the London Cycling Campaign, Ashok Sinha, has called for the introduction of cycling routes more akin to those found in Holland.

The latest death of a cyclist at London’s Elephant & Castle roundabout saw a mass protest at the weekend (as part of a previously organised event) with Mayor...

Fifth Cyclist Dies in Just Nine Days In the early hours this morning a cyclist was pronounced dead in a London hospital a matter of hours after a young woman was...

Another cyclist has been killed in a lorry collision in London. This brings the total up to twelve for 2013 – and four in just eight days. ThisWeekinFM has reported...