Another Roof Fall. Another Death 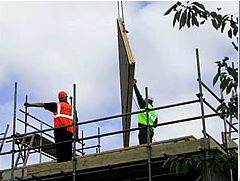 Two companies based in Northamptonshire have been fined after a worker died following a fall through a roof.

Northampton Crown Court heard how an employee of A-Lift Crane Hire Limited, who had been hired by Premier Roofing Systems Limited to provide them with a crane to lift roofing sheets onto a factory roof at Virani Foods Limited in Wellingborough. Whilst the sheets were being lifted onto the roof, the employee fell through an unprotected skylight and died as a result of his injuries.

An investigation by the Health and Safety Executive into the incident which occurred on 9 August 2013 found that preventative measures to allow operatives to work safely on the roof were not put in place.

Premier Roofing Systems Limited, of Unit G, The Grove, Corby Northamptonshire, pleaded guilty to breaching Section 3(1) of the Health and Safety at Work etc Act 1974, and was fined £140,250 and ordered to pay costs of £41,428.

A-Lift Crane Hire Limited, of Main Road, Wilby Northamptonshire, pleaded guilty to breaching Section 2(1) of the Health and Safety at Work etc Act 1974, and was fined £83,300 and ordered to pay costs of £21,500.

The A-Lift Crane Hire website states: 'Assessing all the possible health and safety implications involved in a lift is crucial and is essential in protecting both your project and the safety of our team, as well as avoiding damage to property or the public. We adhere to strict safety guidelines and have been repeatedly certified as 'Worksafe Contractors' by SMAS, who re-assess us annually to ensure we continue to meet the health and safety standards required for this certification.

'All our personnel are fully qualified and have undertaken safety training as part of their qualifications'.