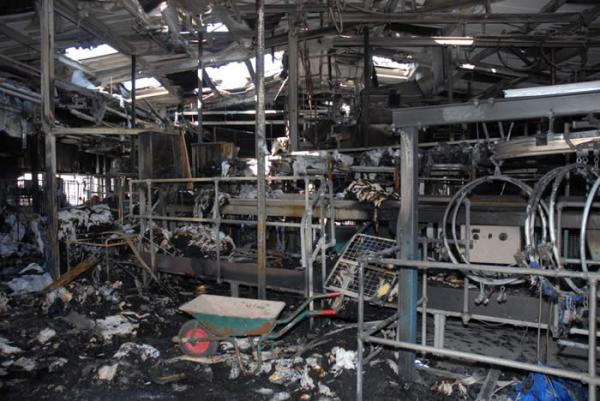 Jane Embury, of Wrightstyle the specialist steel and aluminium glazing company, looks at the impact of arson and steps that can be taken against it.

According to the Arson Prevention Forum, some 70,000 fires are set deliberately every year in the UK. Nearly 50% of those fires are attended by the Fire Service and the total cost of fire insurance claims stands at some £1 billion per year.

The Forum also points out that arson accounts for almost half of all fire and rescue callouts and that it can have the most appalling consequences. In 2014/15, 50 people died in fires that were started deliberately.

Arsonists tend to be young men, although they can be from any social background or age group, or either sex and the peak age for offending is between 14-16-year-olds. The reasons arsonists give for their behaviour is also diverse. Some fires are set as an insurance fraud, while other fires are started simply for the thrill, or for revenge. Some arsonists have mental health issues.

Most deliberate fires are started at night, although not always, particularly in commercial or industrial premises. In the latter, areas such as storerooms or warehouses provide both cover for the arsonist and importantly, stored materials to fuel the blaze.

The Arson Prevention Forum has 10 recommendations for preventing arson or its consequences and advises everyone to be aware of the risks. That starts with a sensible fire risk assessment, looking at every aspect of the business, not least how materials are stored to what fire precautions are in place.

The Forum makes the good point that many companies targeted by arson attack go out of business, so having a plan of action should be front of mind for every business owner.

However, if a fire breaks out, it does not immediately matter if it was started deliberately or not; the important thing is to get everybody in that building to safety. (The fire risk assessment should, of course, have addressed each issue in the evacuation process.)

For example, occupants in a building should generally be able to escape away from the fire. That means having escape routes protected by fire-resistant materials or self-closing fire doors. It also means recognising that fire travels upwards, so that stairways must also be protected.

It also means having exit doors that open outwards to make escape easier and if there are large numbers of people, minimising the crush risk.  (Exterior fire doors should also be checked to ensure that obstructions, e.g. bulk deliveries, are not cluttering them up.)

Where possible, it means making escape routes as short as possible with clear signage and building in planned – and rehearsed – contingencies for evacuating the elderly or infirm. It also entails planning for electricity failure and how to evacuate people in darkness.

In a fire the glass will only be as protective as its frame and vice versa.  Specify each component separately and you run the risk of one failing and therefore the whole fire protective barrier failing.

It is not a subject that we like to think about, but it is a surprisingly common crime that can and does, devastate lives and livelihoods. In that sense Arson Awareness Week is maybe something we should all think about, at all times of the year, rather than a short period of it.

Picture:    Approximately 70,000 fires are caused deliberately every year and arson’s threat needs to be properly assessed by businesses and organisations