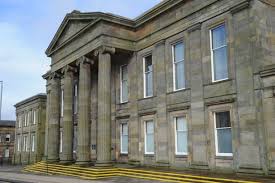 A Paisley based utility services company has been fined for exposing four of its employees to asbestos during work at Anderson Tower in Motherwell in 2014.

Hamilton Sheriff Court heard that four electricians employed by IQA Operations Group Ltd had been drilling through door transom panels to fit electric cables into each property within the tower block as part of the installation of a new low voltage distribution system.

The company had identified that an asbestos survey was carried out ahead of the works starting but did not include a survey of the transom panels above each flat entrance door.

The four electricians started work on the site on 23 June 2014 and drilled holes in the door transom panels in all 44 flats. The electricians were not aware that the panels contained asbestos so no measures were in place to control exposure to airborne asbestos fibres.

On 2 July 2017, a resident raised a concern that the panels were asbestos, work was stopped and the panels tested. The samples tested positive for asbestos. Immediate action was taken to decontaminate the flats which involved the local council making arrangements for the residents to leave their properties while the work was being done.

An investigation by the Health and Safety Executive found that IQA Operations Group Ltd had failed to provide and maintain a safe system of work to identify the presence of asbestos in the transom panels and failed to carry out a suitable and sufficient assessment of risk to their employees from asbestos when carrying out cable routing work.

IQA Operations Group was fined £6,000 after pleading guilty to a breach of the Health and Safety at Work Act.

Speaking after the hearing, Gerry Muir HM Inspector of Health and Safety said: “This incident could have easily been avoided if the company had in place a system of work to ensure that the asbestos survey it requested to be carried out covered all of the intended work areas. Failing to do this resulted in 44 asbestos panels being drilled into with no measures in place to control the risk of exposure to the resultant asbestos fibres.”

A construction company has been fined after a worker fell three metres and lost consciousness.

Huntingdon Magistrates’ Court heard how, on 10 February 2016, an employee of HI-Pro Scaffolding was dismantling a temporary scaffold roof when he fell about three metres through the temporary roof onto the fixed roof below. The employee was knocked unconscious, spent two days in hospital and suffered a broken thumb which required metal pins to be fitted. In total, he was off work for two months.

An investigation by the HSE into the incident found that Hi-Pro Scaffolding had not planned the work properly. There was a lack of communication and the employee was not trained or experienced in this type of scaffold. The company also failed to provide suitable personal protective equipment to prevent a fall.

Speaking after the hearing, HSE inspector John Berezansky said: “This case highlights the importance of following industry guidance to plan the safe erection and dismantling of scaffolding.”

The director of a London based waste contractor has been fined and handed a suspended sentence after a lorry contacted 132kV overhead power lines in north London.

An investigation by the HSE into the incident found that the company put no controls in place to prevent vehicles coming into contact with overhead power lines. Hanly Waste Services had received advice from UK Power Networks, the power network operator, about working near overhead power lines on a number of occasions both before and after the incident as the company had continually failed to implement controls and reduce the bund level to achieve minimum statutory clearances.

Donal Hanly pleaded guilty to breaching Section 37 of the Health and Safety at Work and was fined £8,000 and ordered to pay costs of £7,068.34. The judge also imposed a six month prison sentence suspended for 12 months and a Director Disqualification order for a period of seven years.

Speaking after the hearing, HSE inspector Gabriella Dimitrov said: “This was a very serious incident and it is fortunate nobody was injured.  The incident could easily have been avoided by introducing control measures and safe working practices.  Companies should be aware that HSE will not hesitate to take enforcement action against those that fall below the required standards.”