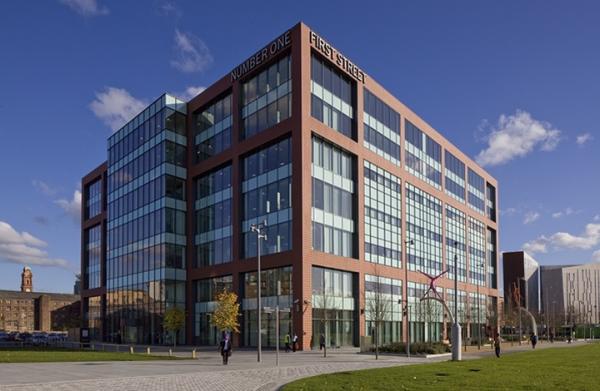 First Street, Manchester’s flagship city centre redevelopment project, hit top gear following the completion of a major letting to Auto Trader which completes its relocation in May to bring 600 staff from seven different locations in to one brand spanking new office location.

Fit-out of the space includes four cars and two vans into the building’s workspace. The lease is for 15 years.

Auto Trader will be joining engineering services provider Jacobs and digital marketing consultancy Amaze in Number One First Street. Jacobs signed a 10 year lease agreement to take 23,526sq.ft and will complete its move to First Street in June 2014.

Trevor Mather, CEO at Auto Trader said: “Auto Trader is making a considerable investment to ensure that the employee offering matches up to the brand ambition. With the planned amenities at First Street and the cultural and leisure opportunities that Manchester offers, we are confident we can continue to grow the business and bring in the best UK talent.”

John Hughes, Managing Director of Ask Developments, commented: “Our existing building will soon be part of a new cultural neighbourhood, anchored by HOME, the merged Cornerhouse and Library Theatre Company, a project which represents £75m of investment in offices, restaurants, retail, leisure and residential space.

“First Street’s City Centre location, transport links, access to a skilled labour force and rents at a substantial discount to the central business district were a major factor in Auto Trader’s decision to relocate from an out of town location. This is evidence of the growing trend of the urbanisation of office occupiers and reinforces our strategy to target businesses that historically preferred out of town locations.”

Ask Developments was advised in the Auto Trader deal by the Manchester teams of Savills and CBRE. Dunlop Heywood and Matthews & Goodman advised Auto Trader.

What Does Tier Three Lockdown for Manchester Actually Mean?

As Greater Manchester moves into the highest tier of lockdown restrictions, we look at what this actually means for residents and businesses. Manchester will move to a...

The Manchester Cleaning Show – Online at a Pivotal Time

Organisers have unveiled details regarding the virtual version of the Manchester Cleaning Show and promised it will be unmissable for anyone connected to the...