Award for Health and Wellbeing 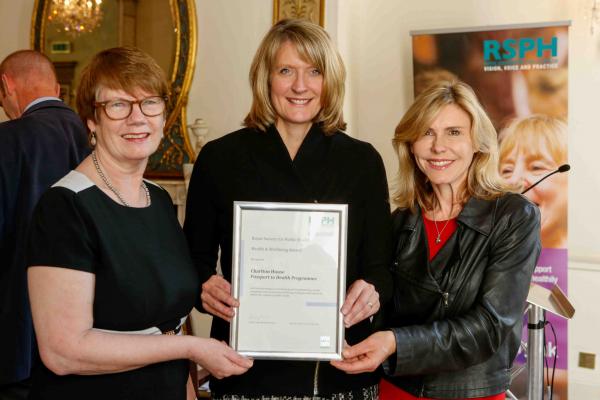 A prestigious RSPH Health and Wellbeing Award 2015 has been won by Charlton House.

Part of the CH&Co Group, Charlton House, has been recognised as part of the Royal Society for Public Health’s (RSPH) annual Health and Wellbeing Awards for its work in these areas.

The Health and Wellbeing Awards recognise achievements in the promotion of health and wellbeing through activities, policies and strategies which involve communities and individuals, improve the population’s health and address the wider social determinants of health.

The scheme receives submissions from all organisations that promote health and wellbeing as part of commissioning, operational support or service delivery. Local authorities, health organisations, education providers, social enterprises, voluntary/charity organisations and private sector organisations in the UK are all invited to apply. RSPH also encourage applications from organisations who deliver health improvement for their own workforce and who demonstrate a commitment to employee wellbeing.

Charlton House is reportedly the only contract catering company to have won the RSPH Health and Wellbeing award and its focus has been largely due to Caroline Fry, Deputy CEO of CH&Co Group.

The award was in recognition is for the current work across the business that gives a ‘strong focus’ to health and wellbeing for the customers it provides food to on a daily basis. It was also for the Passport to Health initiative that it has been running as part of the employee dining services at Gatwick Airport.

Amanda Ursell, consultant nutritionist to Charlton House, explained that there were a number of elements of its service at Gatwick Airport that impressed the judges. “We worked with the Gatwick Occupational Health and Wellbeing team to design and deliver a 12-week pilot wellbeing programme for employees which saw significant reductions in blood glucose and total cholesterol levels along with body weight and waist circumference plus an improvement in happiness and sleep quality.

The catering team at the airport supported with Passport to Health options in the restaurants, including the 'Grill-Up' alternative to the traditional 'Fry-Up' cooked breakfast, nutritionally balanced ‘Grab and Fly’ food bags for crew members, designed specifically to be able to be taken air-side, a range of healthy, calorie counted sandwiches, wraps, soups and salads, ‘bang and shake’ chips, ordered ahead evening meals for employees working shifts and healthy eating messaging, which were there to support all employees, whether involved in the pilot or not.

“These activities were supported by our company-wide wellbeing initiatives, crucial to which is our Chef’s Nutrition Course which has now been attended by over 150 head chefs and chef managers within the company,” concluded Ms Ursell.