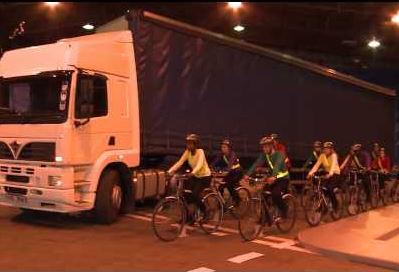 The Freight Transport Association (FTA) has made clear its opposition to proposals being considered by the Conservative government for peak-hour bans on lorries in cities.

It states that such a move is not the ‘right way’ forward on vulnerable road user safety following reports Prime Minister David Cameron told the All Party Parliamentary Group on Cycling that he would ask Transport Secretary Patrick McLoughlin to investigate the possibilities of several measures to improve cyclist safety, including possible HGV bans.

The FTA has written to Mr Cameron on the issue of cycle safety and is having continuing discussions with the Transport Secretary and DfT officials over the best ways to improve safety for all road users while preserving efficiency. It has pointed out, for example, that while early morning is rush hour for cyclists, the pedestrian peak is later. The FTA argues that ‘forcing’ deliveries outside morning peak would interact with another group of vulnerable road users.

It proposes other measures, including:

“Even a medium-sized lorry would have to be replaced with 10 vans which means overall safety would not be improved, let alone the emissions and congestion consequences,” contended Christopher Snelling, Head of Urban Logistics, FTA. “It has to be remembered that we don’t choose to deliver at peak times on a whim; our customers need goods at the start of the working day.”

Mr Snelling went on to call for better awareness, training and behaviour “on all sides to make our roads as safe as they can be”. He noted that certain matters have improved, e.g. the number of HGVs involved in fatalities in the UK had halved in the last 12 years which he believed demonstrated the success of the “progressive approach” to improving safety.

Picture:   The FTA refuses to accept that peak-time bans in cities of HGVs will contribute to overall safety.