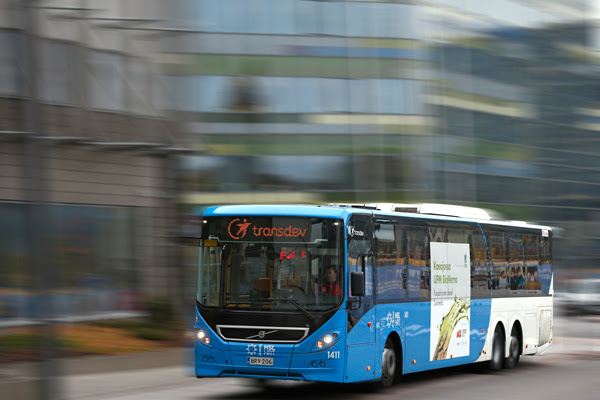 The construction services company, Stara, which operates most of the city's vehicles, will also be involved.

"Switching to biofuels will markedly reduce carbon dioxide and local particulate and nitrogen oxide emissions. This will have a particularly clear impact on air quality in the center of Helsinki," says Unit Director Sami Aherva, of Stara.

The participation of key players in the BioSata project enable a rapid transition to biofuels. HSL, Stara, UPM, Neste, Teboil, St1, the Ministry for Economic Affairs and Employment, the Finnish Petroleum and Biofuels Association and the Technical Research Centre of Finland VTT are jointly seeking the most extensive possible use of biofuels.

The project is part of the Helsinki region's Smart & Clean project, which aims to achieve the most attractive zero-emission mobility in the world.

The advantage of high-quality liquid biofuels lies in the fact that neither new vehicles nor a new distribution infrastructure are required. Local emissions can be reduced through the targeted use of biofuels. Particulate emissions can be reduced by up to a third, by using renewable diesel in older vehicles and machinery. At best, biofuels reduce greenhouse gas emissions caused by the production and use of fuel by 80-90 per cent compared to fossil fuels.

"Taking into account the number and types of vehicles involved, such as buses, trucks and construction machinery, BioSata is Europe's largest coordinated advanced biofuels project. The project will also involve follow-up measurements. These measurements will cover issues such as fuel performance, impacts on local emissions and energy efficiency and maintenance needs," says Research Professor Nils-Olof Nylund of VTT, who is in charge of coordinating the project.

Vehicles serving on HSL's routes in the Helsinki region include around 1,400 buses, which consume about 40,000 tons of fuel each year. Stara's own vehicle fleet uses around 2,000 tons of fuel a year. About 500,000 tons of biofuel are produced in Finland on an annual basis.

The national energy and climate strategy requires that Finland raise the share of biofuels to 30 per cent of all fuels by 2030. Finland is a leading country in the use and development of advanced biofuels based waste and residues.

Picture: Helsinki is getting on the biofuels bus