Bedlam Comes to Life in Dig 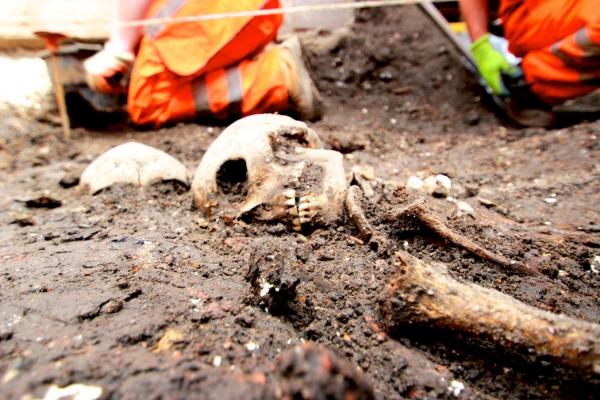 The people buried in Bedlam burial ground at Liverpool Street, in the City of London will have their identities revealed, some of them famous characters in their day.

In June 2014 Crossrail invited 16 volunteers to scour parish records from across the capital to create the first extensive list of people buried at Bedlam in the sixteenth and seventeenth centuries. The resulting database, published this week, will inform Crossrail’s archaeological excavation of the eastern entrance of Liverpool Street Crossrail station, which begins next month. It should result in approximately 3,000 skeletons being excavated as well as shedding light on a tumultuous period of London’s history.

Plague was the most common listed form of death, followed by infant mortality and consumption. The burial ground was established in 1569 to help parishes cope with overcrowding during outbreaks of plague and other epidemics. Crossrail workers recently discovered the gravestone of Mary Godfree who died in September 1665, as a result of the Great Plague which peaked that year.

“This research is a window into one of the most turbulent periods of London’s past,” explained Jay Carver, Lead Archaeologist, Crossrail. “These people lived through civil wars, the Restoration, Shakespeare’s plays, the birth of modern industry, plague and the Great Fire. It is a real privilege to be able to use Europe’s largest construction project to uncover more knowledge about this fascinating period of history.

The upcoming excavation is also expected to uncover medieval and Roman artifacts and help piece together centuries of history. The skeletons will be reburied on consecrated ground afterwards.

Picture: The Crossrail work will continue to unearth London’s past and this will include the famous Bedlam burial site.