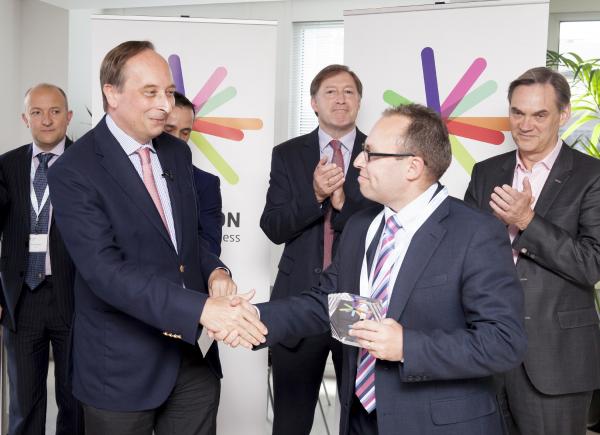 ENGIE (formerly GDF SUEZ) has announced Big Solar as the winner of its Big Pitch UK competition to find the UK’s most innovative clean energy and smart technology idea.
The judges were impressed with Big Solar’s Power Roll photovoltaic (PV) technology, which will be cheaper to manufacture in the UK and easier to install than other solar products. It will also be 145 times thinner than traditional silicon PV products.
Judged by a panel of independent experts, ENGIE’s Big Pitch is an initiative to discover the next big idea in energy and services for cities, communities, buildings and people. Submissions to the competition had to relate to one of four themes: energy efficiency, renewable energy, smart technologies or smart cities.

As winner of the competition Big Solar has been awarded £10,000 and will now have the opportunity to compete for investment from ENGIE’s New Ventures Investment Fund, which has Euro 100 million to invest in clean energy businesses. The company will also receive coaching and mentorship from ENGIE to help it further develop and commercialise the business.

A special award was given to another finalist, The Great Outdoor Gym Company, in recognition of its community benefits and contribution to the drive towards a greener economy. The business is an outdoor gym concept that harnesses human energy and turns it into electricity. It has installations across the UK, including the Queen Elizabeth Olympic Park where ENGIE subsidiary Cofely provides a range of facilities and community support services as well as operating and maintaining the Park’s energy centres.
Wilfrid Petrie, ENGIE’s UK representative and CEO of Cofely, commented: “The way the world generates and consumes power is going through an unprecedented transformation. To successfully navigate what ENGIE describes as ‘the energy transition’ requires innovative thought and a fresh perspective. Big Solar demonstrated these attributes with their unique and exciting PV offering. We are delighted that the Big Pitch has been so successful in uncovering a depth of entrepreneurial talent in the clean energy and smart technology space in the UK.”
Picture: Neil Spann (right) receiving his award from Wilfrid Petrie.