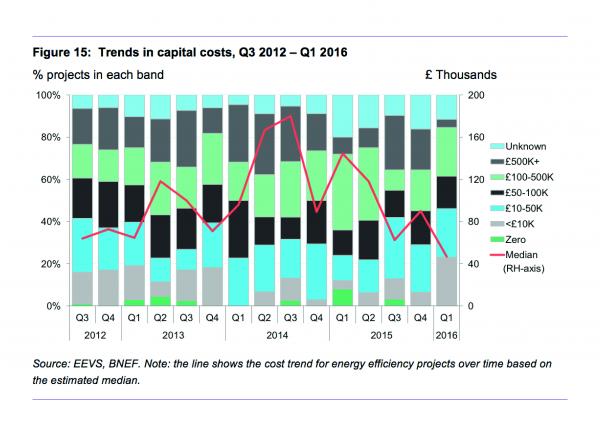 The latest issue of the UK Energy Efficiency Trends report from EEVS shows that the typical spend on energy efficiency is £47,000 per project.

“Organisations appear to have almost entirely shunned the ‘big ticket' energy saving schemes in the £500,000 plus range,” said Ian Jeffries, Director, EEVS. “As a result we've recorded the lowest ‘cost per project' since the research began; now just £47,000.”

Jeffries went on to state that while the reasons for this decline are unclear, it was fair to speculate that the increased uncertainty and business risk associated with a potential Brexit meant that organisations were, for now, taking a ‘wait and see' attitude and were deferring bigger investment decisions until market confidence returns. “If the long term referendum polls are correct and the country votes to remain within the EU, perhaps we'll see a return to material investment growth in Q3 and Q4 of 2016,” Jeffries speculated.

The report also highlighted a reversal in the recent trend towards increasing use of third party finance with the majority reverting to core in-house capital this quarter. In addition, respondents reported a tightening of payback expectations for the third consecutive quarter with the median payback expectation per project now three years.

Bellrock, a FM service provider, backed the finding in the report.

“As a UK-based business with international clients, the uncertainty reflected in the report over the potential Brexit is certainly reflected by our own experience,” said Richard Singleton, MD, Corporate, Bellrock. “Decision making is stagnating and not just for energy efficiency projects, although this is not as true for our healthcare and education sector clients.”

Singleton believed that while General Elections had seen a degree of uncertainty prior to results, the EU referendum had far reaching ramifications. “The long term trend for lower capital projects will probably continue therefore until such a time as there is confidence in the clarity for trade and stability for the economy in general,” he concluded.

Picture: Energy projects are being hit by speculation over the result of the forthcoming EU referendum

More than half of global organisations plan to increase energy efficiency spending in the next 12 months according to the Johnson Controls' 2018 Energy Efficiency...

The Forward Funding Of Eli Lilly