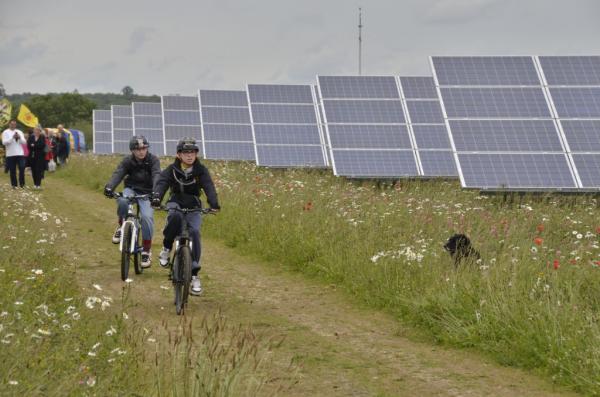 New research has shown that solar farms can significantly improve local biodiversity with benefits to wildlife and potentially even surrounding crops.

The study has found that solar farms have a ‘positive impact’ on biodiversity for a range of plant and animal species when combined with an appropriate land management plan, in particular broad leaved plants, grasses, butterflies, bumblebees and birds.

The report has tested and confirmed a growing body of anecdotal evidence that solar farms can actively benefit local wildlife. It may also further validate advice given by biodiversity specialists, such as the BRE National Solar Centre Biodiversity Guidance for Solar Developments which demonstrates that solar PV can be combined with agricultural activity, e.g. grazing while benefiting the natural health of the surrounding area.

The Effects of Solar Farms on Local Biodiversity: A Comparative Study was carried out by ecological consultant Clarkson & Woods and Wychwood Biodiversity and examined 11 solar farms in England and Wales alongside neighbouring control plots. The authors claim that the research is the most comprehensive and in depth UK study in the field so far.

At each of the 11 selected sites various methods of land management were being used including seeding sites with a diverse seed mix, limiting the use of herbicides, conservation grazing or mowing and management of marginal habitats for wildlife.

The level of benefit to biodiversity is dependent on the management – the stronger the focus on wildlife management the better. In this way, solar farms provide a ‘mosaic’ of meadow habitat and important foraging grounds and shelter for many species.

The report goes on to suggest that the findings are not only beneficial for wildlife but could also provide eco-system services important for people and agriculture. For example, by becoming net producers of pollinating insects which are in decline across the UK, solar farms can promote the health of surrounding crops such as cereals, vegetables, soft and orchard fruits. Furthermore, the report states that ‘solar farms are unique in the farmed landscape in that they provide a high value ‘crop’ (solar power) while leaving the majority of the land area free for wildlife management’. The authors call for more research in this area.

“We’re delighted with the findings of this survey,” declared Leonie Greene, spokesperson for the Solar Trade Association (STA). “It confirms that solar farms, when done properly, are an asset to our countryside and our natural environment. It also reaffirms the best practice standards our members have set out in our 10 Commitments for Solar Farms. By adhering to these standards solar farms can enhance the ecological value of the land and encourage land diversification.”

Picture: Solar farms have been found to protect and encourage biodiversity and are not just a source of energy

An online florist has identified 10 plants that possess qualities that can improve health and wellbeing and increase productivity in the office. The good folk at...