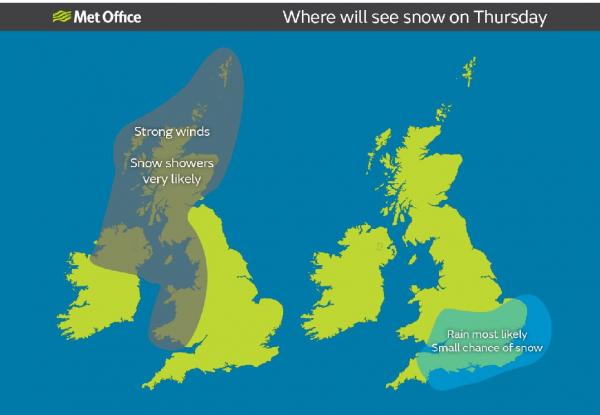 The Met Office has said it will turn cold and windy as a Polar maritime airmass, with its origins over northern Canada, moves into northern Scotland and then south across the whole of the UK.

The cold airmass will bring much lower temperatures to all parts by Thursday and biting northwesterly winds to the North. Snow showers, gales and widespread overnight frosts will affect much of the UK.

National Severe Weather Warnings have been issued for wind and snow, with the heaviest and most frequent snow showers likely across northern and western Scotland, Northern Ireland and around Irish Sea coasts. Eastern coasts will also be affected at times later. There will be gales which could lead to temporary blizzard conditions as well as a risk of hail and thunder in some locations.

(The Highways England website states that the m62 is still closed in both directions to high sid3ed and vulnerable vehicles between junction 36 and 37 - Ouse Bridge.)

Snow in the South

Although the south of the UK is likely to avoid the majority of the snow showers this area will see a spell of rain on Thursday and there’s a small chance that this rain could turn to sleet or snow.

Steve Ramsdale, Deputy Chief Meteorologist at the Met Office said: “Southern counties of England and Wales will see a spell of rain during Thursday and there’s a chance this could turn to sleet or snow, especially over hills later in the day. Forecasting snow is always challenging and there’s often a fine line between whether it will rain or snow in a particular location depending on slight changes in air temperature. Keep an eye on the forecast and warnings for your area for the latest information.”

Daytime temperatures are likely to be around 2 to 5 °Celsius, however the strong to gale force winds will make it feel much colder. Overnight, a frost will develop in most places with some severe frost likely where there is snow on the ground in the north. Temperatures could dip below -10 °Celsius over snow cover in rural areas.

Inland areas will be more sheltered and may escape any snowfall altogether but it will still be cold. At the moment it looks like the cold weather will last into the weekend though snow showers will become more isolated.

Meanwhile the public and emergency responders of have been warned of severe or hazardous weather which has the potential to cause danger to life or widespread disruption through our National Severe Weather Warning Service. Some of these warnings have become reality...see below.

By Wednesday evening several cm of snow will begin to accumulate away from western coasts, especially over higher ground. In combination with gale force winds, gusting up to 65 mph near showers, travel conditions will start to turn very tricky, resulting in longer travel times.

A deepening depression will pass northern Scotland on Wednesday, accompanied by strong and gusty winds. It will also start to pull in much colder air, which will lead to the showers turning to snow, sleet and hail in many areas later in the day. Lightning may accompany the heavier showers, with potential disruption to power supplies.

According to the BBC a lorry overturned earlier today, closing the Forth Road Bridge in both directions. Power cuts have also been reported in Argyll, Inverness and the north east. Scottish and Southern Electricity Networks said about 1,500 properties in the north of the country had lost power as a result of the weather.

Newgate Street in Newcastle was closed after part of the roof of the Eldon Square shopping centre was damaged. More than 30,000 properties across northern England were left without power in gale-force winds. Gusts of up to 75mph have caused damage to buildings and caused problems for road and rail users. A spokesman for Northern Powergrid said it hoped to have power restored to all those affected by the afternoon.

High winds whipped up waves which smothered a passenger train on the Cumbrian coast near Whitehaven. Northern Rail said services were delayed in parts but still operating.

In Pelton, County Durham, fire crews have been trying to make safe a house where a gable end has collapsed. Police also urged drivers to avoid the Barlow Lane area of Winlaton after a shed was blown on to the road.

Roads in Derbyshire were closed but reopened by 2:00pm.

The Met Office has issued yellow weather warnings for wind and snow across Northern Ireland through until Friday.

Again according to the BBC, there is a good chance of thundersnow in Wales come Thursday. Thundersnow is similar to a thunderstorm, except snow falls instead of rain.

Picture: Driving may get tricky over the next few days and wind is blowing bits of buildings again

With winter well on its way, the Met Office is urging the UK public to prepare themselves for the winter ahead. The Get Ready for Winter campaign aims to help raise...