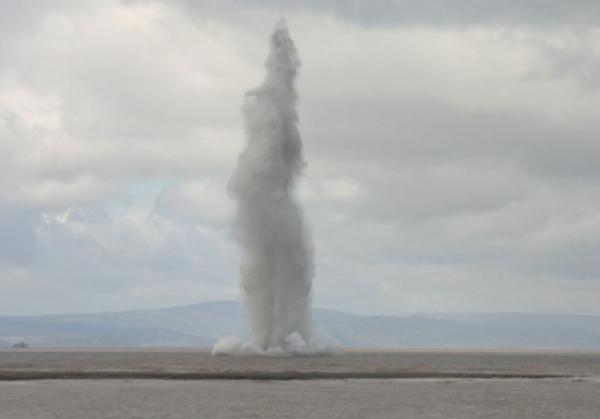 ThisWeekinFM has had a response to an enquiry last week regarding the detonation of an unexploded WW2 bomb in the estuary at Hinkley Point that saw the vicinity cordoned off for safety - followed by a spectacular explosion.

A spokesperson for the Royal Navy said: "We can confirm Royal Navy Divers' Bomb Disposal Squad from Devonport were called in on August 16 to tackle a 250lb. This was the same crew that handled 500lb similar vintage ordinance on August 7."

No comment on the extent of disruption has been received from EDF (who own, operate and develop the Hinkley Nuclear Power plant on the banks of the River Severn/Bristol Channel in Somerset)  whose own divers found the bombs. However, David Eccles, EDF Energy's Head of Stakeholder Engagement for Hinkley Point C, did say: "It is normal practice to check the seabed before construction activity starts on any marine project. The safety of the public and our workforce is our priority and we have a team of 10 divers checking the seabed ahead of the construction of the main cooling water tunnels and associated seabed structures for Hinkley Point C."

The first bomb was found about 4.6km from the coast; the second just 500 metres away. Lilstock Range on this part of the river was extensively used by the military - a World War One device (found by a metal detectorist) caused the nearby Berrow Beach to be closed on July 31.

The local Coastguard was involved in securing a cordon and informing vessels to keep clear.

The Coastguard were more involved in the area earlier this year - ferrying a Bomb Disposal Squad out to Stert Island to tackle a massive 700kg World War II bomb.

Burnham-on-Sea's Spirit Of Lelaina hovercraft crew flew members of the Navy team out to Stert at 5:00am and the bomb was successfully detonated from a nearby boat just before midday on the Saturday to the delight of a seaside crowd on the Esplanade.

A huge plume of sea water gushed into the air, followed by a bang and a low rumble which could be heard around Bridgwater Bay.

Picture: The detonation on Stert Island on April 12 2017