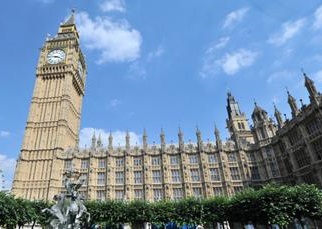 Since ThisWeekinFM reported this story on Monday Aug 14, MPs, concerned the Bell & Chimes would be silenced for too long, have intervened to consider if the period of silence can be shortened from the proposed four years.

One reason for silencing the Bell & Chimes is the risk to the hearing of those working on the project.

One of the world's most interesting maintenance jobs will get underway next week (Aug 21) as London and Parliaments Big Ben is silenced for four years and the bell's home, the Elizabeth Tower  is refurbished.

Crowds are being encouraged to Parliament Square for noon on Monday 21 to celebrate BB's last bong and as the hourly chimes are silenced so the Great Clock can be worked on. The chimes were stopped in 1983 and 2007 again for maintenance. Big Ben will still bong on New Year's Eve.

Specialist teams carry out regular maintenance and adjustments to the Great Clock. However, problems have been identified with the clock hands, mechanism and pendulum, which need to be dealt with immediately to ensure that the clock can continue to work properly. Surveys are still being carried out to identify the extent of the works required to the Tower itself but areas of concern have been identified, including cracks in masonry, leaks, erosion and severe rusting of metalwork.

There is a risk that if not addressed as a matter of urgency, the clock may fail or fabric problems may become acute.

One reason the Tower works have been scheduled now rather than when the whole of the Parliament buildings are renovated, is the Tower needs to be brought in line with fire prevention guidance and health and safety measures for staff and visitors need to be improved immediately.

In order to provide a better means of emergency evacuation, and to improve accessibility for a wider range of people, a lift will be installed within the existing ventilation shaft of the Tower.

The last significant conservation work was completed in 1983-85. This involved the cleaning and repair of the stone, painting and gilding works and repairs to the cast iron roof. The structure was stabilised in 1995/96 as a result of works carried out to the Jubilee Line. Parts of the clock mechanism were serviced in 2007 but other areas haven’t been overhauled in over 25 years.

Overall the project’s aim is to repair and conserve the Tower, upgrade facilities as necessary and to ensure its integrity for future generations. Exterior scaffolding will be required - with the clock face visible for as long as is practicable. One working clock face will be visible throughout the works, the hands of  which will be driven by an electric motor. However, the clock mechanism itself will be stopped at times during the works in order to repair the hands, bearings, gears and drive mechanism.

Public sector procurement is governed by UK regulations that implement the EU procurement directives the works will therefore be let through a contract that has been tendered via the EU procurement OJEU process. The clock mechanism repairs will be carried out by the internal team where possible. Costs are expected to be £29 million (inclusive of VAT). The Medium Term Investment Plan of the Parliamentary Estates will stump-up the cash.

The Ayrton light will still shine to show the Houses are sitting - but it will be a substitute whilst the original is being repaired.

Why install a lift in the Tower?

At present there is only a single spiral staircase with 334 steps. Emergency evacuation from the Tower is currently carried out using a complex abseiling rig. To improve safety and to help reduce the time it takes to evacuate an injured person from the Tower in the event of an emergency, a lift will be installed in one of the existing ventilation shafts. The lift will also provide improved access (though not full access due to constraints of the space) for some disabled people who are currently unable to use the stairs and will improve access to the clock for maintenance purposes. It will have no impact on the external appearance.

The Parliament Restoration and Renewal Programme is unlikely to start until the early 2020s.

Picture Parliamentary Copyright: The Elizabeth Tower - home to the Great Clock, the chimes and of course, Big Ben