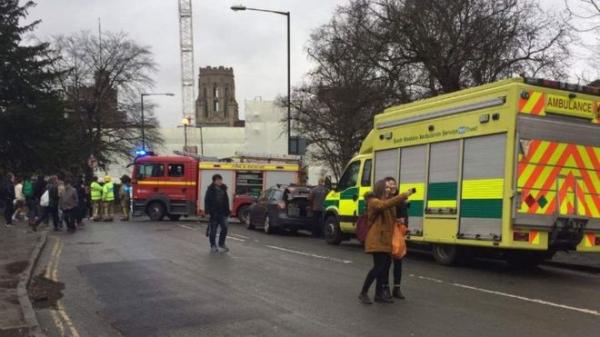 Earlier this month, Bristol University was forced to put its contingency and evacuation plans in to action as fire fighters and bomb disposal experts were called in - why has just become clear - an unstable and explosive substance had been created at the university lab.

According to a statement sent to ThisWeekinFM, the university were aware that a particular experiment can produce an explosive and have procedures in place for when it happens.

The statement reads: 'Following a full investigation since the incident, we can confirm that the chemical, triacetone triperoxide (TATP), was unintentionally formed during a routine procedure carried out by a PhD student. The student was following a published literature method and the risk of TATP as a potential by-product had been identified during the risk assessment process.

'We have robust contingency plans in place to deal with incidents of this nature. As soon as the presence of TATP was identified the student immediately notified those responsible for laboratory safety in the school. A series of actions were then taken which resulted in the precautionary evacuation of the chemistry building and surrounding buildings and the controlled disposal of the substance by the emergency services.

'No one was injured. The School of Chemistry's risk assessment process is being reviewed to determine whether additional checks can be made when future, similar work is planned.'

Although the written statement from the university suggests a calm and ordered response, four fire engines and the Avon Fire & Rescue Service’s Environmental Response Unit attended the incident. The building was evacuated along with others in the vicinity and a safety cordon put in place around the facility. The Army's Explosive Ordnance Disposal team also attended and carried out a controlled explosion at about 7:00pm.

Triacetone triperoxide has been used by terrorist attackers in Brussels and Paris.

Picture: With thanks to Alex Boulton of Epigram - Bristol University Press