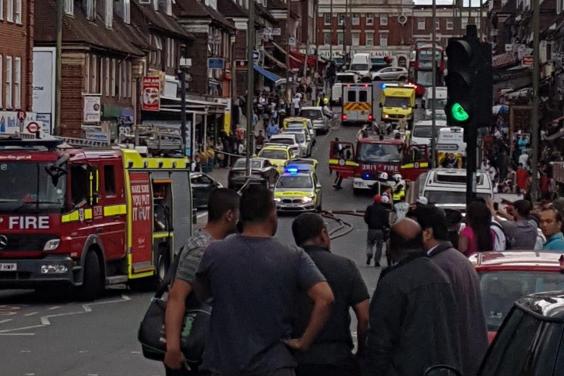 Ten fire engines and 72 firefighters and officers were called to a fire in Watling Avenue in Edgware.

A single storey workshop at the back of a row of shops with flats above was gutted by the fire.  A small part of a shop was also damaged by the blaze. One man was taken to hospital before the arrival of the Brigade. Around 500 people were evacuated from flats and shops in the surrounding area as a precaution.

Station Manager Sean Madeley, who is at the scene, said: "The fire was in the workshop behind a shop and flats. Gas cylinders were involved in the incident.  As a result, a hazard zone was set up as cylinders can explode when exposed to heat.  Crews worked hard in arduous conditions to cool the cylinders and damp down pockets of fire."

Firefighters dealt with a roof fire after a block of flats in Ballards Lane in Finchley was struck by lightning in the early hours of Wednesday 19 morning. It is believed that the bolt of lightning struck the roof causing brick damage. Part of the roof and a second floor flat was damaged by fire.

Also on Wednesday 19, a sprinkler system helped save the Bussey Building in Peckham after a small fire broke out in the early hours of this morning in a fourth floor art studio The sprinkler system alarm sounded and alerted people to the fire. Four people left the building before the arrival of the Brigade.

A London Fire Brigade spokesperson said: “This incident highlights the clear benefits of sprinklers to businesses and we would urge all companies and business owners to install them. In this case the sprinklers successfully contained the fire until crews arrived.

“As well as limiting fire damage and being potentially life saving devices, sprinklers and other fire suppression systems help with business continuity by minimising disruption and allowing businesses to get back to normal as soon as possible.”

With the major London thoroughfare that is Tottenham Court Road already having been closed for a fire incident the previous weekend. Four fire engines and 21 firefighters were called to another blaze, this one at a shop and offices on Wednesday 19.

Part of the basement of the building was damaged by fire. The Brigade was called at just after 6:10am and the fire was under control before 9:00am.

Four fire engines and 21 firefighters and officers were called to a fire at a pub with flats above in Tottenham Court Road on Sunday 16 afternoon.

The Brigade was called at 3:15pm it took about an hour to put the fire out. However, the vicinity was closed off for more than an hour - Tottenham Court is one of London's biggest Shopping Venues as it runs north directly off the famous Oxford Street and is the thoroughfare running up to the Euston Road and thus Euston and King's Cross stations. The Court pub is near Warren Street Tube station which was cordoned off and evacuated.

The day before at breakfast time, six fire engines and 35 firefighters and officers were called to a fire at a hotel on in Chelsea.

A small part of a utility room on the lower ground floor was damaged by fire with smoke logging throughout the five floored building.

80 people evacuated the property before the Brigade arrived and there are no reported injuries. The cause of the fire is under investigation.

Later on Saturday 15, fire engines were called to a fire at a restaurant in Covent Garden. Part of the restaurants extraction system from basement to first floor level was damaged by fire.

Approximately 30 people left the restaurant before the arrival of the Brigade. There were no reports of any injuries.

The cause of the fire is believed to be accidental and due to the build up of oil or grease in the extraction system.

Saturday also saw four fire engines and 21 firefighters called to a fire at a disused office block in Pentonville Road in Islington. Part of the basement of the building was damaged by fire.

Two people left the building before the arrival of the Brigade. One man was treated at the scene for smoke inhalation by London Ambulance Service crews.

The cause of the fire is believed to be accidental despite the block attracting rough sleepers.

Saturday morning also saw a fire at a restaurant in London's swanky Bayswater.

The restaurant's extraction system from the basement, ground floor to the first floor was completely damaged by fire.  A small part of the restaurant and external ducting which led close to an adjacent block of flats of six floors was also damaged by the blaze.

No injuries are reported.  A cordon was temporarily set up in the area.

A London Fire Brigade spokesperson said: “Restaurant and take-away owners should always take care to make sure their extraction systems are kept clean as a build up of fat and grease within the filters can lead to a fire.”

Picture: Burnt Oak's Watling Street was closed on Thursday July 20 - with thanks to Twitter @sparkloaf26