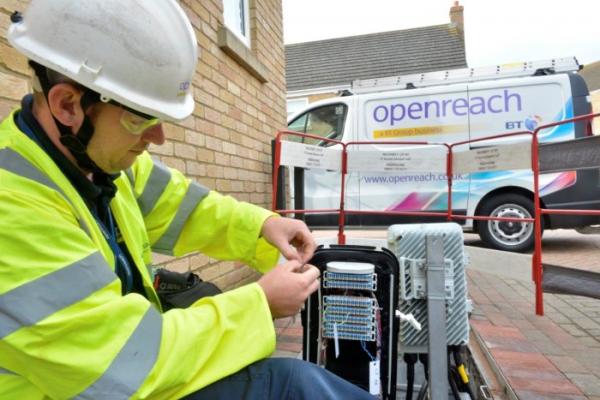 The plans are part of Ofcom’s Business Connectivity Market Review and the new rules will be finalised at the end of April, subject to consideration by the European Commission.

It confirmed plans for tougher quality of service standards for BT’s frequently criticised Openreach division as well as across the telecoms industry.

Ofcom’s Business Connectivity Market Review considers the £2 billion market for ‘leased lines’ – dedicated, high speed data links used by large businesses and mobile and broadband operators to transfer data on their networks. Most of these are owned and maintained on behalf of competing providers by BT.

Leased lines often require complex, bespoke installations and the completion date may be affected by factors such as street works or difficulty accessing premises.

Nonetheless, Ofcom has decided that Openreach is taking too long to install leased lines and is not providing adequate certainty that the services will be provided by the date first given to the customer. Since 2011, the average time between a customer’s order and the line being ready has increased from 40 to 48 working days. Ofcom’s proposals would require BT to reduce this to 46 working days by the end of March 2017 and return it to 40 working days the following year.

Ofcom has also found that Openreach is currently ‘failing to complete one in four leased line installations on the initial date it promised to its customer’.

It is proposing that by the end of March 2017 Openreach must complete 80% of leased line orders by the date it promises customers, rising to 90% from April 2018. Openreach must also fix at least 94% of faults on its leased line network within five hours.

The new rules would apply to high-speed ‘Ethernet’ services, the most common type of leased line used by businesses

“All of us depend on high speed, fibre optic lines – businesses use them to communicate and they also underpin the broadband and mobile services used by consumers at home and on the move,” stated Jonathan Oxley, Competition Group Director, Ofcom. “BT is relied on by many companies to install these lines, and its performance has not been acceptable. These new rules will mean companies across the UK benefit from faster installation times, greater certainty about installation dates and fast repairs if things go wrong.”

Plans to require BT to provide access to its optical fibre network for providers of high-speed leased lines for businesses were confirmed.

This means BT would have to give competitors physical access to its fibre-optic cables, allowing them to take direct control of the connection. This service is often referred to as ‘dark fibre’ because the cables would not be ‘lit’ using BT’s electronic equipment. Instead, they would be ‘lit’ by the competitor installing its own equipment at either end of the optical fibre.

BT is already required to offer wholesale leased line products which bundle the optical fibre and BT’s own network equipment at regulated prices to competitors. BT would still be required to provide these services but the new proposal would go further, allowing operators to use BT’s fibre-optic cables with their own equipment, rather than rely on BT’s equipment.

Ofcom has confirmed plans to reduce the wholesale prices BT charges for leased lines services which the former expects to result in lower prices for businesses.

The main ‘charge controls’ relate to two groups of services provided by BT. These are newer lines based on the 'Ethernet' standards for sending data at very high speeds over networks and older leased lines using 'traditional interface' technology.

Picture:    Ofcom has continued its drive to get value from BT especially with less than satisfactory services that are currently being provided by Openreach