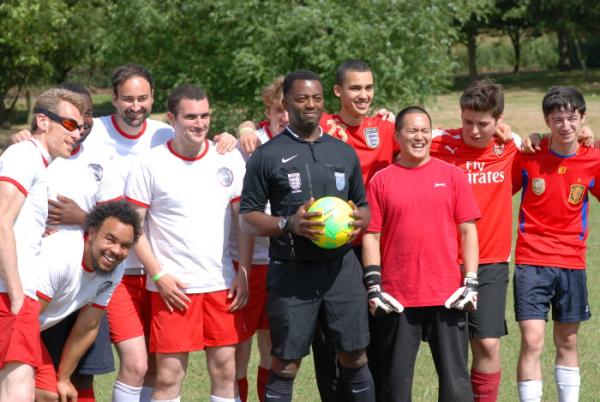 The Campaign Against Living Miserably (CALM), Arsenal in the Community and QPR Community Trust have teamed up with local dad Giancarlo Gaglione to host a five-a-side World Cup football tournament to raise awareness of male suicide, the single biggest killer of men under the age of 45 in the UK. The event will take place in north London Sunday, August 7.

Dad of two Gaglione, 35, said: “Five years ago I lost my youngest brother Lanfranco to an epidemic - suicide. Losing a loved one to suicide is painful but it's even more painful knowing that they never reached out for help, that they never talked about their emotions, that they suffered in silence as often men do.

"Since his passing, I have been on a mission with CALM to raise awareness and get men talking. I host an annual one day five-a-side World Cup in north London in his memory and have been overwhelmed by the support of the local community."

In its fifth year, the five-a-side World Cup event move from Downhills Park in Tottenham to Arsenal. In the shadow of the Emirates Stadium, the tournament is set to take place at the new Arsenal Hub, where Arsenal in the Community is based. The facility opened last year and has one of the finest 4G pitches in Europe with first class changing rooms.

Gaglione continued: “This year we are really excited to be in a new venue and having the support of Arsenal in the Community and QPR Community Trust means we can reach more people. I look forward to welcoming families, footballers, friends and the local community to take part, please come down and play, support or just enjoy the atmosphere.”

Kick off of the first game is at 10.30am and the day will see over 150 players completing in 50 games. Players must register beforehand at www.lanthebaron.co.uk and pay a £10 participation fee but the event is free to attend for spectators.

There will also be food from around the world on the day as well as an XBOX FIFA tournament for players to compete virtually, all in aid of CALM, a charity dedicated to preventing male suicide.