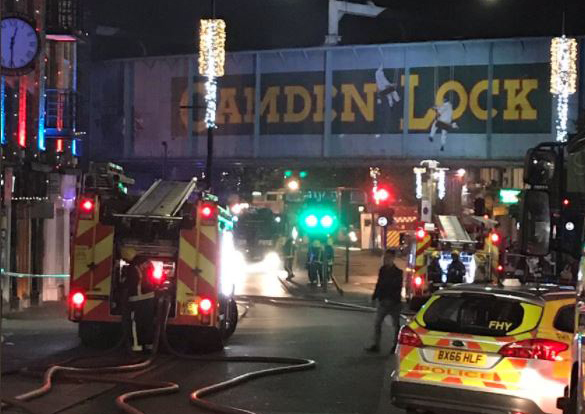 Ten fire engines and around 70 firefighters and officers were called to a fire in Camden Lock Market at just before midnight on Sunday evening (July 9). An aerial appliance was also called in.

The first, second and third floors, plus the roof, of a building within the market were damaged by the blaze. However, despite the intensity of the conflagration, the owner of the market has told ThisWeekinFM on Monday morning that there has been limited damage and only a small section of the wide-spread estate will need to be closed.

However, subsequent reports have claimed that up to 24 small business have lost all their stock and are unlikely to recover.

The affected building contained a number of different businesses and market stalls. No injuries were reported. The wider Camden Lock Market covers a large area on a number of different sites with 'The Stables' where the fire broke out being the most dense collection of buildings. (The stables date back to the horse-drawn era and once belonged to Pickfords Removals. They feature cobbled streets and are next to the canal network. Their age hampers fire precautions. In 2014, 600 people led a blaze in the same location.)

The Market is a popular year-round destination often thronged by tourists. There is a  collection of retail, restaurant, bar and club outlets.

999 took 37 emergency calls to the fire which was highly visible across the area during its early stages. Local Station Manager Andy Walton said: "The hard work and aggressive actions of the crews insured the fire was contained to the area of the building which was alight when the Brigade arrived." The first call was received at 23:57 on Sunday and the fire was under control by 2:50am on Monday July 10. The cause of the fire is already under investigation. Four fire engines and around 20 firefighters remained for a time damping down.

Following what has been described as a massive fire at a Weybridge in Surrey hospital, the council's contingency planning team have opened a rest and refuge at the Weybridge Centre for the Community for those who have been evacuated from around the local area including elderly residents of a care home.

Elmbridge Borough Council's Incident Liaison Officer has been on the scene since the early hours of the morning (of July 12) to assist emergency services. Council staff are currently running the rest centre.

The fire broke out at the building in Church Street just after midnight. No one has been injured as a result of the blaze although a large number of residents have been evacuated. Roads around the building, including Weybridge High Street, have been closed and are likely to remain so for some time.

Resources from Surrey Fire and Rescue Service are continuing to 'damp-down' after the blaze was brought under control.

Surrey police have said an investigation is underway to establish the cause of the fire which remains unknown.

According to one source, the hospital is so severely damaged, it is unlikely to re-open for some considerable time. Reports were also made of explosions being heard up to two miles away. Over-heating oxygen and other gas cylinders are the likely cause.

Surrey Fire and Rescue Service said they had eight pumps, two aerial ladder platforms and three water carriers at the scene at the height of the blaze. Firefighters took every possible precaution, knowing that gas cylinders were likely to explode.

The building affected is three stories high. One patient told local reporters the roof and the top storey were engulfed within minutes of fire alarms sounding.

North Surrey Clinical Commissioning Group, health provider CSH Surrey, and Ashford and St Peter's Hospitals released a statement saying 'Unfortunately the building, which houses two local GP practices, the Weybridge Walk-in Centre and a number of other services such as imaging and physiotherapy, has been severely damaged and will not be re-opening in the near future.

'In the short-term, contingency plans are being put in place for local services including the two GP practices'.

Locals are advised to use A&E services at other nearby hospitals in an emergency.

Picture: Main - the fire in a building at The Stables of Camden Lock Market may have caused less damage than expected at 12:30am on Monday 10 morning.

Below: A 'massive' fire broke-out at a Surrey health centre - with thanks to Surrey Fire and Rescue

Below - The scene at Camden Market as the sun rose plus other pictures as the blaze was brought under control. All with thanks to the London Fire Brigade