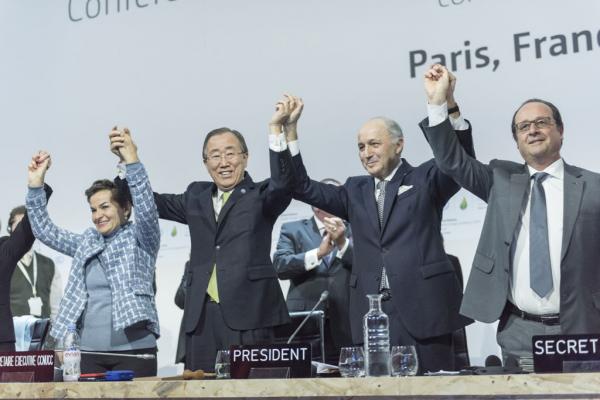 There was much mutual back slapping at the start of the week as COP21 in Paris was trumpeted by the thousands of diplomats, politicians and politicians as making history but the question of enforcing the control of carbon emissions has refused to go away.

Following the adoption of the new Paris Agreement on climate change, United Nations Secretary-General Ban Ki-moon said government representatives had made history at the COP21 conference in the French capital.

“The Paris Agreement is a monumental triumph for people and our planet,” declared Ban Ki-moon in a tweet, immediately following its adoption. “It sets the stage for progress in ending poverty, strengthening peace and ensuring a life of dignity and opportunity for all.”

The news was greeted at the closing session with loud applause and cheers, as the room stood up and many delegates hugged, while others had tears in their eyes, among them former US Presidential candidate, Al Gore.

On the positive side, for the first time 195 Parties to the UN Framework Convention on Climate Change (UNFCC) pledged to curb emissions, ‘strengthen resilience’ and joined to take common climate action. This followed two weeks of what at times seemed to be endless negotiations at the COP21.

The Paris Agreement and the outcomes of COP21 cover all the crucial areas identified as essential for a landmark conclusion:

The principal aim of the agreement is to keep a global temperature rise this century to well below 2 degrees Celsius and to drive efforts to limit the temperature increase even further to 1.5 degrees Celsius above pre-industrial levels. The 1.5 degree Celsius limit is seen as a significantly safer defence line against the worst impacts of a changing climate.

In addition, a review mechanism has been established whereby every five years, beginning in 2018, parties will regularly review what is needed in line with science. “Governments have agreed to binding, robust, transparent rules of the road to ensure that all countries do what they have agreed across a range of issues,” assured Ban.

The problem in reaching these laudable goals will be that COP21 has no means of enforcement if polluting countries continue to emit greenhouse gases above agreed levels. “The measures outlined in Paris simply do not get us there,” warned Kumi Naidoo, Executive Director, Greenpeace International. “We have a 1.5 degree wall to climb but the ladder isn’t long enough. The emissions targets on the table aren’t big enough and the deal doesn’t do enough to change that.”

Picture: Didn’t we do well? But did they – UN Secretary Ban Ki-moon and other luminaries thought so at the end of COP21 in Paris but as ever, the success will be in enforcing the targets