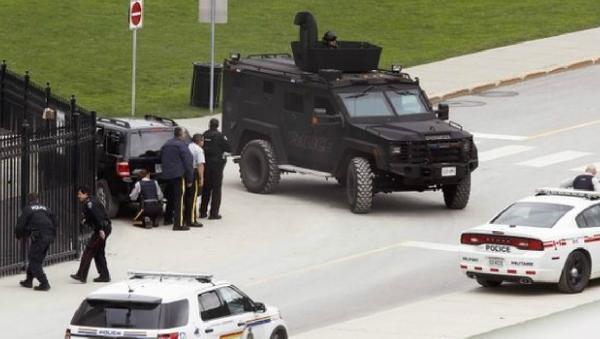 Canada, which has joined the US and UK in targeting IS in Iraq, has a growing problem with 'Muslim' extremism and the threat of guerrilla attacks such as the lone infiltration of Parliament which saw a shoot-out yesterday. A man was shot dead as he attempted to kill MPs. He is believed to have also been responsible for the killing of Corporal Nathan Cirillo minutes earlier at the nearby National War Memorial. On Monday, another attack by an IS influenced Muslim in Quebec saw one soldier run down by a car and another injured. Three people were injured in the incident at Parliament - none seriously.

The nature of the attacks and the radicalisation of young Muslims raises fears of similar attacks across the West particularly in those countries supporting the eradication of IS in Iraq and Syria. The UK has already made numerous arrests of those said to be responsible for inciting terrorism - a call that appears to being headed as several young men have been taken into custody on suspicion of being concerned in the Commission, Preparation or Instigation of acts of Terrorism. Meanwhile, the near secret trial of terror suspect Erol Incedal at the Old Bailey has heard that he planned a shopping centre attack similar to the Mumbai atrocity. It is also alleged he kept an address for Tony Blair and was considering an attack on him and his family.

Canada does not have the same emphasis on security as its US neighbour and so it was left to 58 year old Kevin Vickers, the Canadian Parliament's 'sergeant-at-arms' to tackle what is thought to be a lone gunman who is said to have hijacked a car (letting the driver out just before arriving at the memorial), shot Corporal Cirillo and proceeded to Parliament's 'Centre Block' on Parliament Hill where Prime Minister Stephen Harper was speaking. Harper has since said that Canada will 'not be intimidated' and will investigate whether this was a planned attack by a lone gunman (or with an accomplice) or part of a bigger terror group. The country is now reviewing its security set-up and is said to be on the verge of a 'get tough with Muslim charities' purge.

US advisors are claimed to have stated both the Quebec and the Parliament (Ottawa) attacks were carried-out by Canadian converts to Islam.

It is said that one could walk all the way to Parliament (where the Queen is still head of state) wearing an explosive vest and not be challenged until you got inside. The War Memorial has seen growing number of visitors during the 100 year anniversary of the commencement of the First World War.

In April two people were arrested by the Royal Canadian Mounted Police in connection to an alleged Al Qaeda plot to detonate a bomb on a VIA Rail train. Last week the same police force declared it had 63 national security cases linked to terrorism involving 90 suspects. Those include people who intend to go overseas to fight and those who have returned.

Reuters says that Canadian police are investigating a man named Michael Zehaf-Bibeau (aka Michael Joseph Hall before changing his name) in relation to Wedneday's attack. Views of his Facebook appear to confirm influencers and influences in his radicalisation.