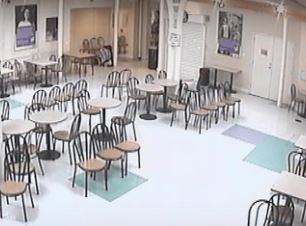 Anita Quansah-Okoe aged 52 from Shannon Grove, SW9 has been sentenced to 80hrs community service and ordered to pay £500 costs after she was found guilty of fraud by false representation.

On 3 July 2013, Quansah-Okoe was working as a chef at Lambeth College when she claim she 'slipped' over in the canteen. She claimed to have suffered multiple injuries after slipping on a wet floor in her work canteen. She then took three weeks off work and took six sessions of physiotherapy.

Quansah-Okoe’s solicitors sent a personal injury claims letter to the college who then passed it onto their insurers Zurich along with CCTV footage. The letter stated that she slipped and landed on her right side and only realised the floor was wet when she saw that her dress was damp and that there was no ‘wet floor’ signs in place.

Her solicitors alleged that she had sustained soft tissue injuries to her right shoulder, wrist, leg, foot and back and damage to her front teeth.

Upon viewing the CCTV, the Zurich claims handler concluded that the claim was fraudulent. The case was then referred to the City of London Police’s Insurance Fraud Enforcement Department.

In her medical report it states that Quansah-Okoe attended Kings College A&E on the day of her fall and that her examination revealed tenderness over her top right shoulder, around her right ankle and that she had pain whilst walking with no bone damage.

Detective Inspector Oliver Little from the Insurance Fraud Enforcement Department said: “The CCTV clearly shows how deliberate and premeditated Quansah-Okoe was in staging this fall. Insurance fraud is not a victimless crime and fraud is estimated to cost every policy holder an extra £50 on their premiums.

Commenting on the sentencing, Scott Clayton, Claims Fraud & Investigations Manager said: "To say Miss Quansah-Okoe exhibited bare faced cheek in pursuing this claim feels like an understatement. As the CCTV footage plainly demonstrates, she shamelessly fabricated a fall in the vain attempt to claim money she was not entitled to.

"Also, it must not be understated that the CCTV footage was invaluable in bringing this case to justice as was the assistance of Lambeth College."

Picture: The footage shows Anita Quansah-Okoe 'falling' in a Zurich customer's canteen. She subsequently filed a personal injury claim for £8,000 after claiming to have suffered a range of injuries and having to miss 3 weeks of work