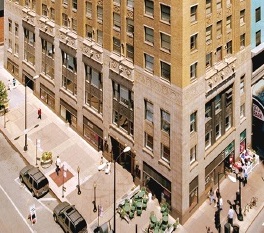 Phase one of the design has been completed with 250 guest rooms, known as Chambers, including 38 one-bedroom suites and The Commons Club, the social focal point of the hotel.

Phase two is due to open in stages between the middle of this month and mid-April, and will include Miss Ricky’s, described in the promotional material as a ‘hip street level diner’; Two Zero Three, is an old fashioned coffee and wine bar; two penthouse suites and The Spa, features a rustic design that is meant to ‘set the mood for relaxation and mingling’.

Virgin Hotels Chicago is located in the centre of Chicago in the Old Dearborn Bank building, a 26-story Art Deco landmark. Several of the building’s original features have been restored and are showcased throughout, e.g. a 1920s’ oak Cigar Bar that serves as the hotel’s front desk and ornate brass lift doors.

Virgin Hotels reports that it continues to explore properties in cities in the USA, including Boston, Dallas, Los Angeles, Miami, Austin, Seattle, San Francisco, Washington DC, and in Europe, London. Of particular interest are locations where it is pursuing hotel and office conversions and ‘ground-up’ development.

Hilton Worldwide has partnered with modular building provider CIMC to develop the first hotel at Bristol Airport under its economy Hampton by Hilton brand. Financed...