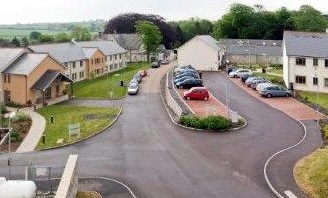 A care home company failed to ensure an elderly resident’s safety when she managed to overcome a restrictor device to open a window and fall from her first floor room.

The care home owner, Hafod Care Association, was prosecuted by the Health and Safety Executive (HSE) at Cardiff Crown Court following the incident on 5 November 2010.

The court heard that 92-year-old Olga Llewellyn was a resident at Brocastle Manor Care Home in Ewenny, Bridgend when she sustained fatal injuries, falling from her bedroom window between 4am and 7am. Her body was found by care home staff.

An investigation by HSE found that all the windows in Brocastle, were fitted with the same type of window restrictors, which were unsuitable for use in a care home because they could be easily over-ridden, so that the window could open wide.

Hafod Care Association, of Culverhouse Cross, Cardiff, pleaded guilty to one charge under the Health and Safety at Work etc Act 1974 and was fined £96,000 and ordered to pay £100,000 in costs.

“This tragic incident could easily have been avoided if Hafod Care had fitted suitable window restrictors,” said Janet Viney, HSE Inspector, after the hearing. “The care home had been open for more than two years and although window restrictors were fitted, they were unsuitable because they could be easily over-ridden. Falls from windows are a very well known risk in the health and care sectors. For example, between 2005 and 2010 there were 21 fatal accidents from this cause across the UK.”

Ms Viney went on to insist that it was essential that care homes took measures to ensure vulnerable residents were kept safe. For example, they should carry out risk assessments and where they identified that individuals were at risk from falls from windows, adequate restrictors should be fitted.

“These should restrict the opening to 100mm, be robust and not able to be over-ridden without the use of a specialist tool or key. In this case, the risks were particularly high because of the very low (650mm) window sill height, which would allow someone to accidentally fall from the window when opening or closing it.”

Pictured: Brocastle Manor Care Home in Wales where an elderly patient fell to her death because of an unsuitable restrictor failed to stop her opening a window fully

The value of a regular programme of faĆ§ade and window redecoration goes far beyond the very obvious aesthetic improvements it entails. Click Image To Read More

COP25 vs COP26: Whatās next for global change action?

With less than nine weeks until the COP26 Summit takes place in Glasgow, it is expected that all eyes will be on the nations at the Summit to progress with negotiations and set ambitious, achievable targets to tackle climate change. Now two years on from the last event, will this yearās summit achieve what COP25 could not? Click Image To Read More

Marco Beverage Systems, a global leader in manufacturing water and coffee brewing systems, has announced the release of POURāD: a cold coffee dispense unlike anything seen before. Click Image To Read More