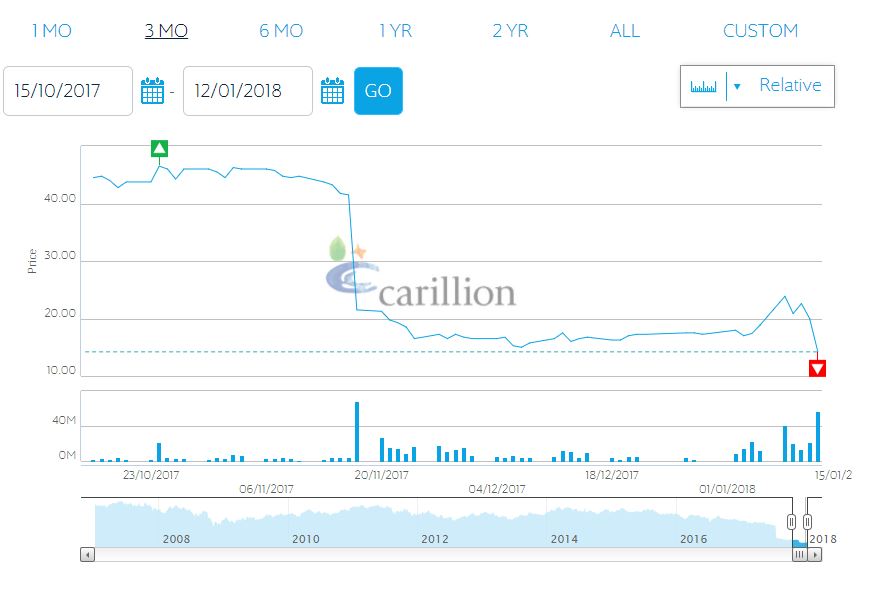 Having broken the Carillion story last week, ThisWeekinFM is now offering technical updates only - including guides to what the government, the Insolvency Service and the Administrator PwC are offering.

From the Cabinet Office and The Insolvency Service as of January 17:

'We know that this is a troubling time for Carillion’s workers and businesses that were in Carillion’s supply chain.

'HMRC will provide practical advice and guidance to those affected through its Business Payment Support Service (BPSS). The BPSS connects businesses with HMRC staff who can offer practical help and advice on a wide range of tax problems, providing a fast and sympathetic route to agreeing the best way forward and addressing immediate concerns with practical solutions.

'Lenders are contacting customers and where appropriate, are putting in place emergency measures, including overdraft extensions, payment holidays and fee waivers to ensure those facing short term issues can be helped to stay on track.

'This ensured small businesses exposed to the liquidation of Carillion are given the support they need.

'The government is committed to funding every apprentice that has already started their apprenticeship programme through to its completion. We have taken steps to protect learners by transferring the training of Carillion apprentices to the Construction Industry Training Board (CITB).

'We will continue to work closely with the CITB to support apprentices to remain in existing placements or to find new employment with other local organisations so they can complete their training.

'For those already receiving their pension, you will continue to be paid. If you need free and impartial advice, call The Pensions Advisory Service on 0300 123 1047.

'There is a special additional helpline with the Pensions Advisory Service for members of Carillion’s pension schemes: 0800 7561012'.

'The governments primary responsibility is to keep essential public services running safely and is providing the necessary funding required by the Official Receiver to maintain those services. Staff that are engaged on public sector contracts continue to come to work and will continue to be paid.

'Work has paused on construction sites, pending decisions as to how and if they will be restarted'.

A notice from PwC the Special Managers/Administrators of the bankrupt Carillion says that unless advised otherwise, all agents, subcontractors and suppliers should continue to work and provide goods and services as normal, under their existing contracts, terms and conditions.

This comes with the reassurance: 'You will get paid for goods and services you supply from the date of the Official Receiver's appointment onwards. Over the coming days we will review supplier contracts and we’ll contact you concerning these soon.  Goods and services you supply during the liquidation will be paid for. A letter will be sent to suppliers shortly containing further instructions. In the first instance, please speak to your usual contact at the Companies (the various trading entities of the Carillion Group).

As expected, many of Carillion's vast number of suppliers have already downed tools and are facing crippling losses. The government has said it will financially support contractors on public sector deals but  on purely private sector deals, there will be very limited support.

Shareholders in Carillion have already been advised there is no prospect of any return to them.

For further announcements from PwC for all stakeholders - Click Here

N.B. ThisWeekinFM has been comprehensively reporting what became the demise of Carillion pre and post Christmas and were the first media channel anywhere to report the calling in of the Official Receiver. As this story is now being covered extensively by national news outlets, we will now only be offering occasional technical updates whilst diverting our resources to other matters of interest to the FM community.

7:00am this morning (15 January 2018) saw the announcement of the compulsory liquidation of Carillion.

An application to the High Court was also made and   granted before business opening with regards to the liquidation. The Financial Conduct Authority has enforced as suspension of trading in the firm's shares.

Even up until Friday afternoon (Jan 12), Carillion's board were in discussions with its creditors - discussions that  stared on Wednesday 10. At 3:00pm on Friday, ThisWeekinFM was the first to speculate that the decision had been made to call in the Administrators. Throughout the weekend, questions have been asked at the highest level 'what will happen to Carillion's government contracts should the company fail?'

This morning, Philip Green, Chairman of Carillion, said: "This is a very sad day for Carillion.  In recent days we have been unable to secure the funding to support our business plan and it is therefore with the deepest regret that we have arrived at this decision (to seek liquidation).  We understand that HM Government will be providing the necessary funding required by the Official Receiver to maintain the public services carried on by Carillion staff, subcontractors and suppliers.

"An application was made to the High Court for a compulsory liquidation of Carillion before opening of business today (January 15 7:00am) and an order has been granted to appoint the Official Receiver as the liquidator."

The company, which had already been in discussions with two potential administrators, EY and PwC, have asked the Official Receiver to make an application to the High Court for PricewaterhouseCoopers LLP to be appointed as Special Managers (to act on behalf of the Official Receiver).

Picture: Carillion employs 20,000 people in the UK alone out of 43,000 worldwide along with a massive supply chain. It's pension fund is £600 million in deficit. The Pensions Protection Fund will now take over management.

Early on the morning of 9 Jan 2018 (7:00am) Carillion plc announced that although there had been a recent increase in the Group's share price, they were not aware of any material developments to support the rise. However, discussions with the Group's financial stakeholders were expected to take place on Wednesday January 10 - with an expected positive outcome fuelling the share price rise.

By 3:00pm on Friday January 12, rumours were circulating that Administrators had been called in to the troubled firm.

Carillion's share price has plummeted steadily since July 2017 - they were 90 per cent of their value just last week when a long list of hiccups was capped by the announcement of a Financial Conduct Authority investigation (in connection with the timeliness and content of announcements made by Carillion between 7 December 2016 and 10 July 2017).

If a new deal with financiers does emerge or the administrators step in, the company will almost certainly be obliged to divest itself of current loss making projects and may also be forced to sell parts of the company.

Having sold its profitable NHS FM contracts to Serco just recently, it would not surprise anyone if more of Carillion's FM business were to go the same way - if not for the whole support services business to go lock, stock and barrel.

In November, Carillion sold its majority share in Ask Real Estate Limited and its 50% interest in Ask Carillion Developments LLP for a cash consideration of £13,800,000, (with a cool £1 million coming from the sale of one HQ office building).

The deal was done by outgoing Interim Chief Executive Keith Cochrane who is to be replaced by former Wates boss, Andrew Davies, on January 22.

The company's five bankers (four of which are Deutsche, Barclays, HSBC and Santander) are said to be wary of offering any more funds.

Given the company's level of debt and other liabilities and despite a positive pipeline, most share speculators have stayed away on the grounds Carillion has no value. Some analysts believe even the company's bankers are unlikely to pursue a debt for share option. Deutsche Bank did, only last week, take more voting shares in security.

Too big to fail

Some analyst expect the government might be tempted to step in with a financial support package given Carillion's importance to UK infrastructure and major FM and other outsourcing. The group has recently secured placement on valuable government frameworks (which temporarily lifted share values). This was not the first time the government found itself accused of a 'bail out' of a company 'too big to fail'. Other analysts believe the government  simply could not risk any further associations with failing companies and will simply let the market take the hindmost.

Reasons to be cheerful

Carillion actually has a reasonable pipeline of work (including the recent government wins). The company's biggest problem is cash and cashflow. Extracting itself from bad deals has cost vast amounts of money and thus confidence and that all important cashflow. The sums involved were also greatly underestimated -which the markets dislike greatly, especially when they lead to repeated profit warnings.

Getting out of deals badly

Part of a the negotiations were expected to revolve around getting out of bad deals - and yet as can be seen, Carillion has a recent history of getting out of even good deals badly...the portfolio of contracts sold to Serco for £47 million (which was expected by Carillion to be £50 million) has current annual revenues of approximately £90 million and a weighted average remaining term of 14 years valuing them at approaching £1 billion.

No news was forthcoming from Carillion from Wednesday to Friday. By 3:00pm on Friday January 12, rumours were circulating that Administrators had been called in to the troubled firm fuelling specualation that the compnay's supply chain would 'down tools' leaving the operation even more exposed than they had been.