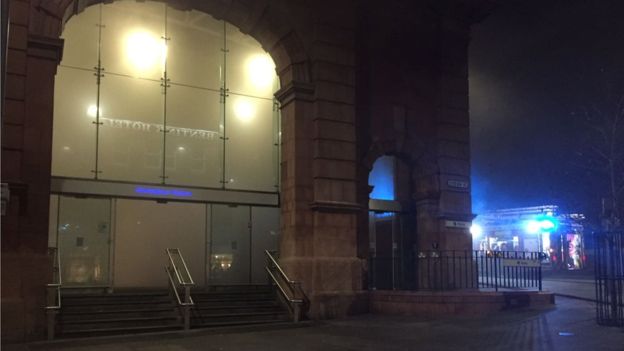 British Transport Police have arrested a woman on suspicion of arson in connection with their investigations in to a blaze Arrest at Nottingham railway station.

The massive fire engulfed different parts of the complex. The fire is thought to have started in a woman's toilet.

The person arrested, in Derby, is a 33-year old woman who is currently (Friday 2, 2:35pm) still in custody. Enquiries are ongoing and officers are continuing to appeal for information.

Senior investigating officer, Det Insp Granville Sellers, has said he would particularly like to speak to anyone who was at Nottingham railway station between 5:00am and 6.30am on Friday 12 January, who may have seen something or somebody which caught their attention.

On the day of the fire, roads around Nottingham Railway Station were closed. The station and buildings and hotels in the area were evacuated.

The blaze broke out at 6:30am. Ten crews and appliances were called to the scene where the fire had spread from the lower concourse all the way to the roof.

The emergency services also evacuated all commuters from the platforms and from the station foyer which filled with smoke. Trains were stopped on their tracks causing chaos through to Saturday as Network Rail engineered re-routing.

Picture: A fire at Nottingham train station spread from the lower concourse all the way to the roof

The night of Tuesday 25 July saw smoke visible for miles following a fire near the Royal Docks. Fire Brigade 999 Control Officers took around 35 emergency calls to a fire...

Oxfordshire's Fire and Rescue service dealt with three major fires in South Oxfordshire - one, at council offices, is as a result of a suspected arson...