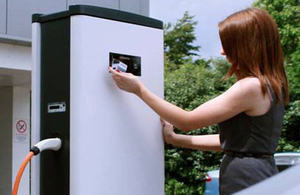 As part of an ongoing commitment to making transport greener and improving air quality, the Department for Transport is consulting on a series of measures that will make chargepoints more accessible, making it easier for drivers to recharge as demand for low emission vehicles increases. The measures are due to be included in the Modern Transport Bill.

Secretary of State for Transport Chris Grayling said: "We are committed to making transport cleaner and giving even more drivers the option of using a low emission vehicle as we strive to improve air quality across the country.

"Our ambition is for nearly all new cars and vans to be zero emission by 2040, and we are taking real steps to achieve this in the Modern Transport Bill. We now want to hear the views of businesses and the wider public."

The measures being proposed would give government powers to support the roll-out of charging and hydrogen refuelling infrastructure and improve consumer access to the network by:

There are already more than 11,000 public chargepoints across the UK and the country has Europe’s largest network of rapid chargepoints. The government also offers a range of grants for home and workplace charging.

The Modern Transport Bill, first announced in the Queen’s Speech in May, will outline the role technology and innovation will play in delivering the safe, efficient and user focused transport systems of the future. The bill is due to be laid in Parliament next year.

The Department for Transport is also consulting separately on the proposed transposition of the Alternative Fuels Infrastructure Directive; Europe-wide legislation that will further promote the roll-out of charging facilities for vehicles that run on electricity, hydrogen and other clean fuels.