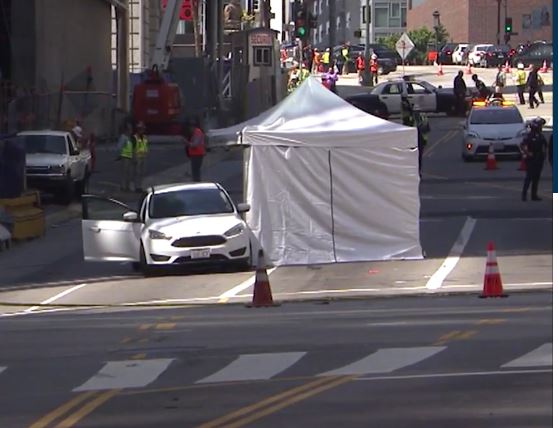 According to news reports from the Los Angeles Times, LA Tribune and Fox News, an electrician has died (on Thurs 17) after falling 53 storeys from the Wilshire Grand Tower construction site in Los Angeles - it was only his second day on the site and he should not have ventured beyond the third floor.

The worker is believed to have landed on the back of a car. The woman driver was taken to hospital suffering hysterical shock. Police were quoted as saying the man struck the rear of a car on Wilshire Boulevard when he fell.

It was reportedly only the man's second day working on the project.

The billion dollar Wilshire Grand Tower will be the tallest on America's west coast. It had only recently celebrated its topping-out ceremony. It will be a luxury hotel, developed by Korean Air. It is set to open in 2017 at 73 storeys high

Reports suggest that the floor from where the man fell did have protection barriers fitted.

Work will not start on Friday.

Susan Abram of the Los Angeles Daily News, reported: 'A man who fell to his death from the 53rd floor of a high-rise building in downtown Los Angeles on Thursday had no safety harness on and was not working, a spokeswoman with the construction company on the project said. The 73-story hotel is under construction and the work is being done by Turner Construction Co'.

The Los Angeles Daily News also quoted a spokesperson from Turner Construction Co as saying:“We have confirmed with Cal/OSHA and LAPD that the incident which occurred at the Wilshire Grand project site today was not work-related. After an initial on-site investigation, Cal/OSHA has confirmed that no fall-protection violations were observed.”