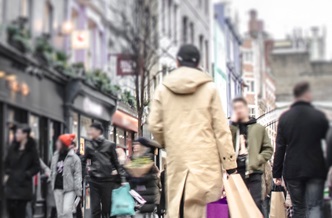 Maybe Mike Ashley has a different plan for House of Fraser. JLL in America has predicted that co-working in retail properties will grow 25 per cent per year, for the next five years.

The traditional 9-to-5, five-day work week, routine is slowly morphing into work-life integration, said JLL from Chicago. Approximately 43 per cent of employed Americans now say they spend at least some time working remotely and there's no signs of that slowing. As a result, flexible space is on the rise and seeking new, unconventional locations to root their operations. At the same time, retailers are consolidating their stores leaving prime spots available in retail locations.

"The current retail market is pushing landlords to find new ways to invigorate their space with alternative tenants, including co-working  spaces," said Holly Rome, Director of Retail Leasing, JLL in the windy city. "Setting up a co-working  space in a retail property provides workers a fun, yet functional space with great accessibility, ample parking and value-added amenities such as personal services, shopping and food options. These tenants bring in daily traffic and have a stable master lease that's typically five to 10 years."

"Co-working  is no longer a start-up only culture. Most flexible space today actually provides dedicated and private areas to larger companies that need to scale their workforce up or down," said James Cook, Director of Retail Research for JLL. "This wide range of needs has created four distinct co-working  spaces that we think will increase in retail, each tailored with different amenities."

The costliest co-working  space at $404 on average per person per month is Retail Launchpads. This kind of space is where nascent brands and innovative tech companies can gain access to target shoppers. It's not just a place to work – it's a place to play too. Cowork at the Mall, a new retail incubator opening in Chicago's Water Tower Place will be a mashup of customised pop-ups, showcasing, co-working  and events. What makes this model really work is its ability to infuse the retail space with makers, innovators, and high-tech brands interacting with consumers and offering interactive experiences. These launchpads draw crowds and wallets, making the mall a destination.

These co-working  spaces are growth vehicles for entrepreneurs and freelancers, coming in at $255 on average per person, per month. The perks include offering special business development tools including capital, consulting services, creative support, specialty equipment, classes, and mentors. They are typically located in higher income areas, and are a good choice to backfill vacant space in mid-level neighbourhood centres.

These spaces offer community and workspaces for artists, makers, and creatives,  drawing in millennials by combining community events and retail in their space. More than 75 percent of these spaces are in urban locations with walkable neighbourhoods.

Telework hubs are the most common, comprehensive co-working  location. They are a mix of office workers, entrepreneurs, and creatives, and represent nearly 80 percent of the spaces that JLL studied. This kind of co-working  format will likely backfill vacant space in mid-level retail centers, taking on average 30,000+ square feet.

Picture: A co-working space on every High Street.