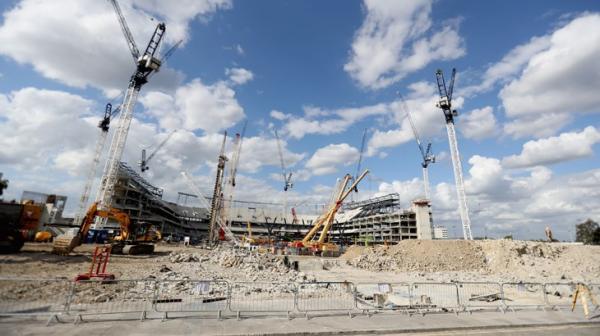 A planned strike by Unite members for Sept 8 at tower crane company HTC Wolffkran (the largest company of its type in the UK) has been suspended following pay negotiations held on Monday Sept 4.

The strike had been expected to bring widespread disruption of construction sites including at the Tottenham Hotspur development where any delays are critical to the club's plans to return to their new home for next season. Chairman Daniel Levy will be singing a happier tune as a result so long as the strike is not reinstated for later in

The pay offer will see workers receive a six per cent pay increase over two years as well as two one off payments of £250 by the end of 2017. In addition workers will see their paid annual leave entitlement increase by two days by January 2019 and receive greater flexibility on taking unpaid leave during the Christmas shutdown.

Unite’s members at HTC Wolffkran will be balloted on whether they wish to accept the offer - to be concluded by Sept 15.

The Unite union has announced a crane strike at HTC Wolffkran which will bring widespread disruption of construction sites across the UK - including delaying the development as Tottenham Hostpur's new ground.

The initial 24 hour strike is scheduled on Friday September 8.  HTC Wolffkran is the largest tower crane company in the UK. Unite members voted for strike action after the company refused to continue negotiations and imposed a two year deal on the workers of a three per cent pay increase in both years and increasing annual leave to the standard industry level.

Unite national officer for construction Jerry Swain said: “Despite seeking fresh talks to avoid strike action, we have been unable to reach a satisfactory agreement and therefore have no option but to take strike action.

“Our members are simply not in a position to meekly accept an imposed pay increase, which is a pay cut in real terms compared to the current rate of RPI. This so called increase is in effect a substantial reduction when compared to the increases that workers are receiving in the industry.

“Even at this late stage Unite is entirely open to holding further talks and to explore ways in which industrial action can still be avoided.”

The union has also called on the government and the industry not to throw ‘baby out with the bathwater’ as industry considers the Construction Industry Training Board's (CITB) future.

The government has recently given the go-ahead for the CITB to continue to collect the industry levy but this is subject to a positive vote from construction bodies and this ‘consensus’ process is currently underway. In the past week (ending Sept 1) both Balfour Beatty and the Home Builders Federation have indicated that they will not support the continued collection of the levy.

The union believes that the CITB's role in managing apprenticeship training and ensuring it is of a good quality is critical. 'If the organisation was to disappear then the existing skills crisis in the construction industry would worsen and the overall quality of construction apprentices would decline'.

Unite assistant general secretary Gail Cartmail said: “The industry is in danger of throwing the baby out with the bathwater. The CITB is not perfect but if it was to disappear the effect on construction would be devastating.

Last year the CITB had total income of £311 million. Its largest area of expenditure was its charitable training grants scheme which accounted for £153 million. Major construction companies receive the largest grants, the companies which received the largest amount of CITB funding were Carillion £6.9 million, Kier £5.2 million and O’Rourke Investments Ltd £3 million.

Picture: Major works could come to a standstill on Friday Sept 8 if a crane strike goes ahead