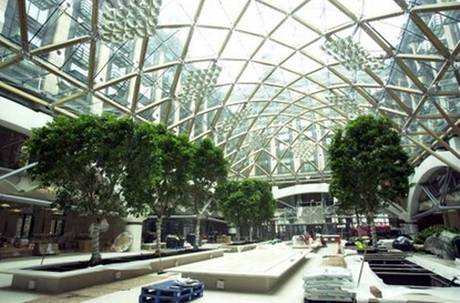 The office home for MPs, Portcullis House (pictured), opposite the Palace of Westminster, has proved to have had more than its fair share of problems which was shown last week with the revelation that its glass roof has cost £36,000 over the last years to put right.

Designed by Michael Hopkins and Partners, it opened in 2001 and was controversial for coming in well over budget at £235 million. MPs had leather seats costing £400 each and fig trees were said to have been rented at a cost of £400,000 by 2012. However, the glass roof atrium has caused headaches with cracking that has resulted in it having to be toughened. The architect has refused to answer the question why the problem has not been rectified after all this time, citing “confidentiality” as the reason.

A National Audit Office report in 2002 found 7,500 defects, including cracked glass panels in the courtyard roof and 300 loose door handles.

Not unnaturally, the latest report  has infuriated a number of groups, including the Taxpayers’ Alliance. “After blowing taxpayers’ money on fig trees and water features, the parliamentary authorities are rubbing salt in the wound with these repair costs,” declared Andy Silvester, campaign manager, Taxpayers’ Alliance. “They, and the architect, must come clean about why so much taxpayers’ money is being spent. For £235million, a functioning roof is the least you’d expect.”

A House of Commons’ spokeperson provided a defensive response: The spokesman added: “There is an ongoing investigation to establish the cause of existing damage and to eliminate the risk of future faults. As we are always committed to achieving value for money, the investigation will also identify the most cost effective means of safely removing and replacing the damaged panels, whilst ensuring that any long term maintenance costs are kept to a minimum.”