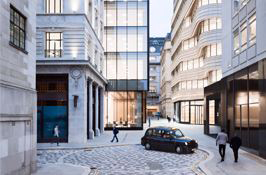 Forecasts had been for an increase of been between 4.4 and 5.8 per cent but this year has seen the busiest year ever of sales, purchases and capital expenditure totalling nearly £1.2 billion, which included acquisition focused on improving the Estate's position in London's West End.

Capital activity totalled nearly £1.2 billion. This includes over £500 million of disposals, over £350 million of acquisitions and over £300 million of capital expenditure, including expenditure on development.

Over 640,000sq.ft of space is leased across the business, with agreed rent totalling £43 million  per annum at over 7% above the Estimated Rental Value (ERV).

The Crown Estate owns the whole of Regent Street and much of St James’s where it is delivering a £1.5 billion investment and redevelopment plan.

This year, The Crown Estate completed its most significant development pipeline with the completion of the £450 million St James’s Market in partnership with Oxford Properties. This is now three-quarters let to a mix of fashion, lifestyle and restaurant brands.

Between 2013 and 2016, the business delivered around 900,000sq.ft of new space into the core West End. It is now actively preparing for the next phase of development across its Central London portfolio, including two mixed-use schemes: the £100m Duke’s Court redevelopment in St James’s which is already under construction; and Morley House, which has planning permission.

The strongest financial performance came from offshore wind with the value of the Energy, Minerals and Infrastructure portfolio increasing 18% overall to over £1.1 billion. Wind is now  meeting over 5% of the UK’s electricity demand and on-course to  meet 10% by 2020 - so the Estate is well positioned to capitalise. Operational offshore wind assets generated £27.7m for the business. There are 30 wind farms with a total of 5.1GW of operational offshore wind and a development pipeline into the 2020s. Asset management activity included signing over 2.6GW of leases in 2016/17 for four projects. This included agreeing the lease for the 1.2GW Hornsea One offshore wind farm with DONG Energy, which once complete will provide enough electricity for one million homes.

This £2.4 billion portfolio of 19 retail and leisure destinations has benefited from continued demand for high quality space in dominant schemes, attracting 100 million visitors per year. Void rates remained low at just under 1.9%, with 39 new lettings totalling over 240,000sq.ft at nearly 3% ahead of ERV.

This year, it will deliver over 1 million sq.ft of development with the launch of two schemes at Rushden Lakes in Northamptonshire and Westgate in Oxford City centre.

The rural business has continued to focus on the sale of non-core assets to reshape a portfolio with larger lot sizes and modern tenancies. It has also continued to acquire and progress land sites, with purchases totalling £14 million and planning applications submitted for over 1,400 homes this year. The sale of strategic land sites and non-core rural land in Dorset and Marlborough continued to provide an important source of capital, raising £209 million at 13.2% above book value.

Digital but Physical Management with MyTAG

MyTAG’s paperless security system has been proven with some of London’s largest portfolios. MyTAG aims to provide trusted proof of presence, security,...