Croydon - the Dull to be Demolished 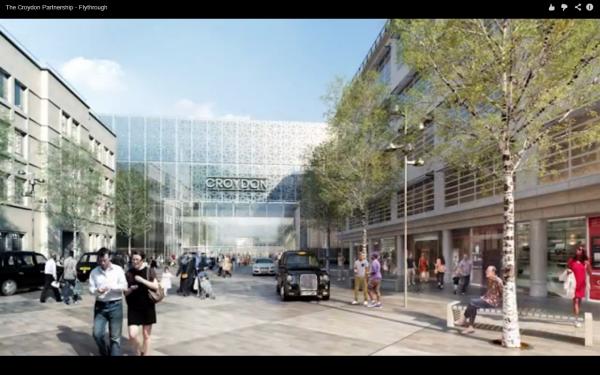 A third Westfield Shopping Centre has been approved for London – or Croydon, Surrey to be precise. The ageing Whitgift centre will not just be refurbished, it will be demolished to make way for The Croydon Partnership’s £1bn scheme to transform the town centre into 1.5millionsq.ft state-of-the-art retail, leisure and restaurant complex, together with new public spaces, new car parking and up to 600 new residential units. These will be so called ‘affordable housing’. The Centrale shopping centre, is earmarked for refurbishment, though the video accompanying this article, infers that it too will be demolished.

Westfield is the giant Australian shopping centre developer and operator. They will partner with Hammerson on the Croydon project. Hammerson is an FTSE 100 company with a portfolio of retail property in the UK and France of around £5.7 billion, including 20 prime shopping centres, 22 retail parks and investments in 9 premium designer outlet villages.

The project is expected to provide the kick start to Croydon’s much needed regeneration and will attract new residents and visitors back to the town centre.

The London Borough of Croydon has resolved to grant planning permission to the Croydon Partnership’s outline planning application for the redevelopment of the Whitgift Centre, marking a significant step forward in Westfield and Hammerson’s plans to regenerate Croydon’s retail town centre.

At a special meeting of the Strategic Planning Committee, dedicated entirely to the Croydon Partnership’s proposal on 25 November 2013, the application received support from the committee.

The planning approval is part of the Partnership’s wider 2million.sq.ft vision to regenerate the town centre, including the adjacent Centrale shopping centre, which has planning consent for a refurbishment programme.

The project will involve improvements to existing public areas adjacent to the development such as North End, Poplar Walk, Wellesley Road and George Street together with new road junctions to facilitate traffic flow at Wellesley Road and Park Lane.

The scheme will also provide over £30million towards local transport improvements and employment and training benefits. The employment initiatives will be aimed at ensuring Croydon’s local population and particularly its youth, are able to benefit from the new job opportunities the development will provide.

The key elements of the contributions are:

£15m for the tram network

£10m for the bus network

£1.3m for employment and training initiatives

The London Borough of Croydon has already initiated the preliminary stages of a potential CPO process having sent out letters to all of the parties that would be affected and held preliminary discussions. This is in advance of the Council’s consideration to use CPO powers to support the site assembly process in the New Year.

Following the Council’s resolution to grant outline planning consent, the application will now be considered by The Mayor of London. Detailed designs for the scheme will be unveiled during 2014 and a start on site is expected in 2015.

John Burton, Director of Development of Westfield, commented:  “This is a significant step forward in our plans for the redevelopment of Croydon’s retail town centre and importantly will create 5,000 new local jobs. We believe that our proposed £1bn investment into the transformation of Croydon’s shopping and leisure offer has the potential to act as a major catalyst for the wider physical and social regeneration of the town.”

Peter Cole, Chief Investment Officer of Hammerson, added:  “Our goal is to deliver a world-class retail and leisure destination to attract new visitors to the town and ensure Croydon regains its status as a thriving town centre.”