Dead End or a Clear Road Ahead? 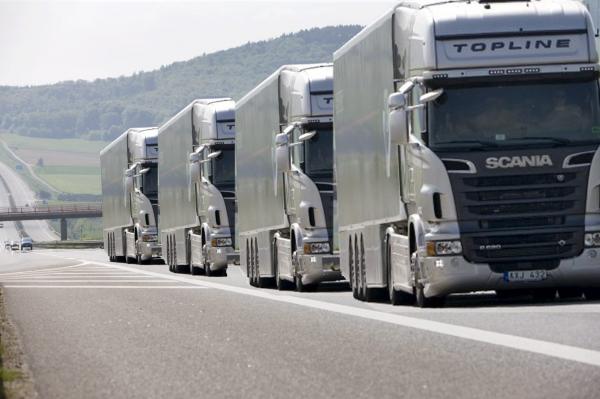 The Road Haulage Association (RHA) has reacted with caution to the announcement of trials by the DfT for the ‘platooning’ of trucks.

The term ‘platooning’ describes a driving formation whereby decreasing distances between trucks using electronic and possibly mechanical, coupling. This capability would allow a number of trucks to accelerate or brake simultaneously. Grouping vehicles into platoons is a method of increasing the capacity of roads.

“At the outset, it is important to note that these trucks will not be ‘driverless’,” stated Richard Burnett, CEO, RHA. “Each cab will be manned. As far as we are concerned, this is an issue where the devil lies in the detail.”

The RHA believes that when platooning trials eventually begin they will be carried out ‘off road’ and will only be trialled on the motorway network when proven off-road.

On the plus side, Burnett felt this was a concept that had benefits in terms of fuel saving, particularly in those countries that have long stretches of roads without junctions; unlike the UK motorway network.

“Today’s UK haulage industry is increasingly IT-led, however, are UK roads and more importantly, other road users ready for it?” he queried. “The technologists have it all to prove. Many of the elements of this that make it theoretically possible are already starting to arrive in modern vehicles. But are motorists ready for the technological advances that will make this concept possible?”

The RHA will be working with the Centre for Connected and Autonomous Vehicles and will be following the trials with ‘keen interest’.

Roll up for Summit

The Freight Transport Association’s (FTA) Skills Summit to explore issues including driver shortage, the image of the logistics industry and public perception, comes to the Ricoh Arena in Coventry next Thursday (17 March).

It reports that there are a few free places still available for the event which follows the success of last year’s Driver Crisis Summit that attracted more than 600 delegates.

There is currently a shortage of 45,000 HGV drivers across the country and a recent survey of FTA members highlighted problems recruiting engineers, technicians and warehouse staff too.

“There has been a slight improvement since last year’s event but more needs to be done to professionalise the logistics industry and improve its image to make it a more desirable and aspirational place to work,” explained James Hookham, Deputy CEO, FTA. “The summit will build on the success of last year, helping employers to develop strategies for recruiting and retaining staff. We’ll also look at the results of FTA’s public perception survey about the road transport sector and explore what can be done to ‘sell’ it to the public.”

The all-day event features a filmed keynote speech by entrepreneur and Skills Show patron Theo Paphitis and an afternoon of masterclasses hosted by a variety of industry experts focusing on attracting new talent from specific sectors including school leavers, armed service leavers, EU workers and NEETS (young people not in education, employment or training) and retaining the skills that organisations currently have.

A motorist has escaped a fine and points on his licence after anti-motor fraud specialist, Asset Protection Unit (APU), was able to prove his innocence by analysing the vehicle’s telematics data.

The driver, from Wembley, London was accused of speeding in Lincoln in November last year even though the vehicle thought to be involved, a BMW 2 Series, was still in Wembley. The police issued the fine of £100 and three penalty points when a vehicle was caught by a fixed speed camera in Lincoln travelling at 35mph on a 30mph stretch of road.

However, the hire car was equipped with a telematics’ device which proved the vehicle was, in fact, located at the other end of the country at the time of the alleged offence, meaning the vehicle had been cloned.

The driver, who wishes to remain anonymous, said: “I couldn’t quite believe my eyes when I first opened the letter saying I’d been caught speeding in a city I hadn’t even visited for years. At first you question yourself but ultimately I knew I hadn’t been to Lincoln and certainly not to break the speed limit.”

Data generated by the In-Car Cleverness telematics’ device was interrogated by APU experts who wrote to the police to provide evidence in support of the driver’s denial he was at the wheel. The police later dropped the case.

“It’s very satisfying to help out innocent motorists of course but the real worry here is that it’s almost certain the vehicle in question has been cloned,” noted Neil Thomas, Director of Investigative Services. “We’ve seen a number of similar cases surface recently and the worry is that cloning could be back on the rise again.”

It is thought thousands of vehicles are cloned annually, costing motorists hundreds of thousands of pounds in fines, while enabling criminals to break the law at will and get away with it.

Picture: By the left wheel quick march but bodies like the RHA are concerned about the viability of the idea on the UK’s busy motorway system

Evidence provided by a telematics device has caught a motorist who ploughed into a pedestrian walking home from a Christmas celebration last year. The incident...

Europcar Mobility Group is to partner with Telefónica and Geotab to enable real-time telematics monitoring of vehicle fleets. The technology will provide the...

The Future Of The Company CarÂ