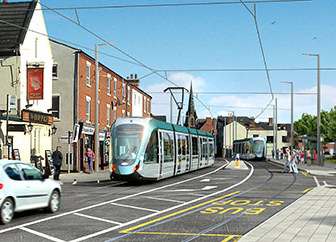 Hopes for the completion of the Nottingham Tram extension this December appear to be dashed and contractor, Taylor Woodrow Alstom, has been blamed. Costing £570 million, the tram extension has suffered from a number of delays that could lead to the contractor, owned by French parent company, Vinci, substantial penalty charges.

The extension project had commenced in 2011 and was due for completion this December but it appears that the earliest end is likely to be Easter of 2015. The contractor cites problems with dealing with redirecting utilities, such as sewers and electricity, plus addressing noise attenuation issues.

"We're not very happy about it,” said Graham Chapman, Deputy Leader Nottingham city council. “The contractors are ultimately responsible for it but it could take some time,"

For its part, Vinci is taking the view that it had made clear at the start of the job in 2011 that it might not be finished until 2015. It has also warned that it may ‘scale back’ its involvement with similar schemes.

Pictured: The Nottingham tram extension is not going to plan and the blame game appears to have started between the city council and parent company for the contractor, Vinci