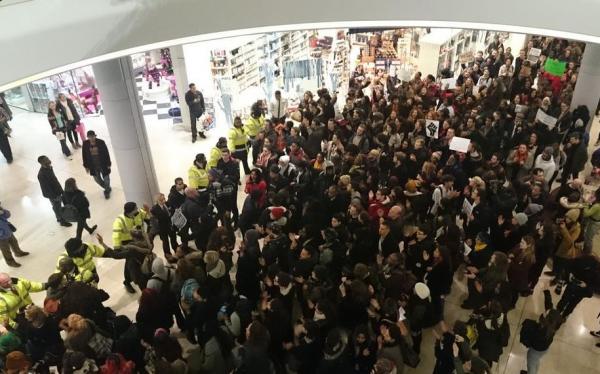 Last week arrests were made at Westfield Shopping Centre, White City, London as a demonstration got out of hand. ThisWeekinFM asked Westfield how they had prepared for the demo and how they worked with the Police.

A total of 76 people were detained with regards to public order offences with one man further arrested on suspicion of assault after police responded to a number of incidents arising from what was a protest surrounding the death of Eric Gardner in New York. A group of protestors broke away from the main gathering of some 600 people outside Shepherd’s Bush Station and attempted to force entry to the shopping centre with subsequent allegations of assaulting security staff and causing damage to property. The Met stated that in response to this, it used a number of tactics, including a containment for the purpose of ‘preventing violence and effecting arrests’.

A spokesperson for Westfield told TWinFM: "Westfield London worked closely with the Met to manage the protest for Eric Garner which took place on Wednesday evening. (Garner had died in New York in July while being forcibly restrained by police but a Grand Jury had decided no action would be taken against the NYPD, sparking protests in the USA and around the world.)

“To ensure the safety of shoppers, retailers and protestors, a designated area was provided outside Shepherd’s Bush station; however a group of protestors also gathered in the centre. The first protest passed peacefully and protestors exited the centre.

“A small group of protestors later attempted to force entry to the centre past Westfield security. Members of this group were detained by Met police officers. This is now a police matter. Throughout the protest the centre remained open and trading.”

Picture: Westfield in Shepherd’s Bush, West London, was the scene of an attempt by some demonstrators to enter the complex. The Centre's security staff worked closely with the Police to formulate a plan for the demonstration and react to a break-away group