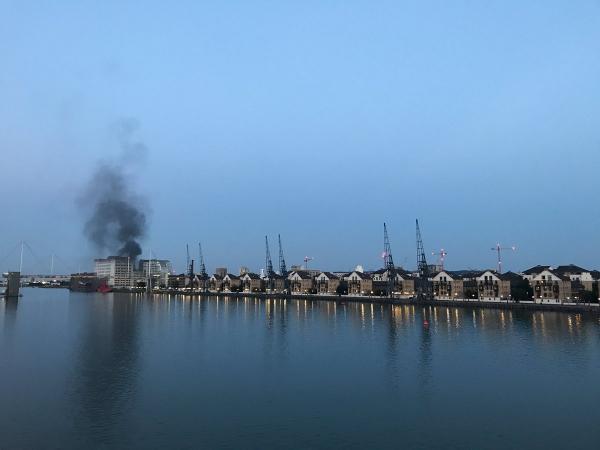 The night of Tuesday 25 July saw smoke visible for miles following a fire near the Royal Docks. Fire Brigade 999 Control Officers took around 35 emergency calls to a fire on the site of the Old Millennium Mills building in Silvertown.

The fire was confined to a portable cabin which contained office furniture but it took four fire engines and 21 firefighters to bring it under control.

In the early hours of Wednesday 26, another four fire engines and 21 firefighters and officers were called to a fire in the basement of a restaurant on Baker Street, Marylebone.

A worker in a neighbouring property raised the alarm when they smelled burning and dialled 999.

A walk-in fridge was completely destroyed. Firefighters entered the basement and found it heavily smoke logged but the fire had burnt itself out.

A 17-year-old girl appeared at Westminster Magistrates' Court charged with a terrorism offence on Wednesday 26. She was charged with the intention of committing acts of terrorism:

She has been remanded in custody and is due to appear at the Old Bailey on Friday August 11.

She was also previously charged in April with acts in preparation contrary the Terrorism Act.

A man who was arrested by officers from the Met's Counter Terrorism Command on Wednesday July 26, has been charged.

Nourdeen Abdullah, 36, from north-east London was charged on Thursday 27 with two counts of disseminating terrorist publications, contrary to Section 2 of the Terrorism Act 2006 and possession with intent to supply Class A drugs, namely crack cocaine.

Picture: The Royal Docks fire could be seen from miles around