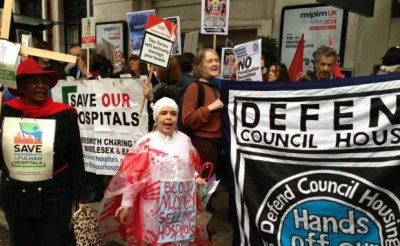 London Olympia was the focal point for contrasting groups with major property developers and owners, ministers and scores of international investors, rubbing shoulders with council officials.

They had gathered for the inaugural MIPIM UK show, but demonstrators outside did not share one of the themes promoted inside Olympia – solving the UK housing crisis through striking a balance between public and private sector development, UK and overseas investment.

Over 4,000 delegates attended, including more than 500 investors, making MIPIM UK the biggest ever gathering for the British property sector.

Representatives from 35 cities and local authorities, including Manchester, Leeds, Liverpool and the Scottish Cities Alliance, joined the private sector developers, investors and advisers. Of the UK attendees, 60% were from London and 40% from the rest of the UK.

In an opening speech London Mayor, Boris Johnson, explained that he was committed to seeing 500,000 new homes built for Londoners over the next 10 years.

His statement was in contrast to the story that surfaced this week of the eviction of tenants in Griffith Road and Raynesfield, Morden, South London by the Mayor's Office for Policing And Crime (MOPAC). Many of the tenants are teachers and hospital workers who state they cannot afford to live in the area with the rents at the rate they are.

However, MOPAC defended the sale as part of a massive selling off of properties owned by the Metropolitan Police to meet a funding gap and pushed through by Johnson. In a statement, MOPAC said: ‘The sale of both of these properties is part of the biggest restructure of the Met estate in 50 years and all of the money raised will be pumped back into front line policing right across the capital.’

Pictured: A tale of two cities – demonstrators outside London Olympia against MIPIM UK, which ironically had as one of its themes how the housing crisis could be solved