Doin' in the Knowledge 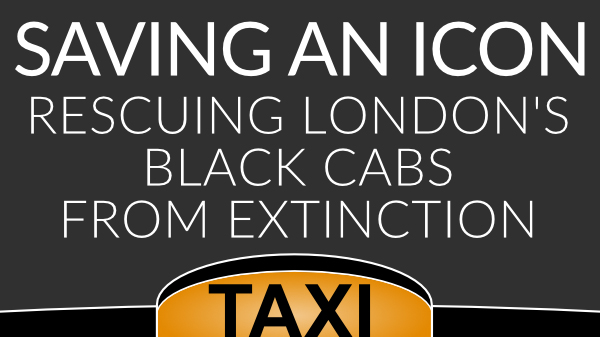 The Knowledge should be scrapped in its current form as part of an eight-point plan to save London’s black cab industry, according to a new report by Conservative London Assembly member Richard Tracey.

"Research has found the notoriously difficult navigation test, which can take up to three years to pass, is acting as a major barrier-to-entry for potential new drivers," he claims. "Just five per cent of London’s cabbies are aged under-35, compared to four times as many over 70 and young drivers are increasingly put off by the length and cost of the complex exam."

The report says that, if the black cab industry is to compete with increasingly popular app-based private hire firms such as Uber, it must make eight major changes.

1. The entry requirements for the London Knowledge must be reduced by two thirds

2. Sponsorship should pay for the rollout of cashless payment technologies

3. PHV licence fees must be increased in line with black cab licences

4. TfL must be re-shaped as a more pro-active taxi and PHV (Private Hire Vehicle) regulator

5. TfL should offer interest-free loans to drivers for the purchase of new Hackney Carriages

6. The introduction of ULEZ (ultra low emission zone) regulations for black cabs should be delayed until 2020

7. The Mayor of London should commission a competition review of the taxi industry

8. Taxi ranks should come as standard for all large new developments

Tracey continued: “The plight of London’s iconic black cabs is increasingly worrying as consumers seek out a cheaper and more streamlined service through app-based firms like Uber. I want this world-renowned industry, which has been a staple of London’s culture and image, to survive. But to do so it must make some fundamental changes to its pricing structure and the way it operates.

"The Knowledge has long been the gold standard of our black cabs but demanding that new drivers learn thousands of different routes and points of interest to memory is outdated and archaic in an age of sat-navs. Cutting down The Knowledge as part of a package of reforms will level the playing field for our much-loved cabbies and ensure our roads remain full of this popular and practical icon for the foreseeable future.”