Doing Your Bit to Beat the Terror Threat 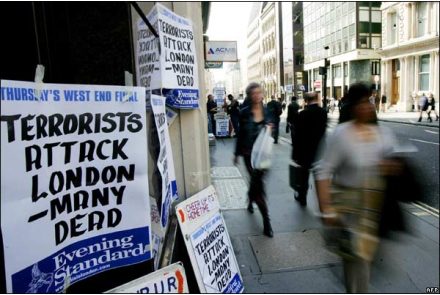 A new initiative has been launched by the National Police Chiefs’ Council that aims to get one million staff involved in tackling terrorist attacks.

The scheme by NPCC will be based in busy areas across the UK to play a part in protecting against attacks and show staff what to do in the ‘rare event’ of a major incident unfolding.

The move comes after atrocities in Paris and Brussels led to calls for more vigilance from all communities, including the business sector. The new industry self-delivery package has been devised by police security experts from Project Griffin, the country’s leading counter terrorism awareness scheme. It targets sectors such as retail, hospitality, entertainment and travel and builds on an existing partnerships between counter terrorism police, emergency services and local companies.

Project Griffin began in 2004 and specialist officers around the country are now briefing around 100,000 workers every year.

However the new self-delivery programme aims to reach 10 times that number.

Launched this week at the Security and Counter Terrorism Expo in Olympia, London, Detective Chief Superintendent Scott Wilson, the national police coordinator for Protect and Prepare told an audience of security professionals that company bosses who support the project will be helping to keep staff, customers and communities safe. “Although the UK threat level has remained unchanged since August 2014, it is still at severe,” he warned. “The police service is working tirelessly to address the threat but we need everyone to play a part in keeping the public alert, not alarmed. Police can help explain what the threats and risks to different sectors are but companies are better placed to explain to staff exactly what action they can take to enhance their security and how to respond if the worst happens.”

Detective Wilson stated that individual organisations had vital protective security information, e.g. building layouts, security equipment and safety procedures with the local knowledge that could be vital to keeping staff and the public safe.

“This is why we have devised self-briefing packages bespoke to different sectors,” he told the audience. “Companies that meet the criteria should contact us and we will work with their training teams to ensure they have all that they need to deliver Project Griffin approved training themselves.”

Many businesses have already pledged to take part in the self-briefing programme. Organisations signing up to the initiative will need to be public limited companies and have a team of qualified trainers. Priority will be given to those who operate in a crowded place, e.g. a city centre, sporting or entertainment complex. Police will continue to offer the briefings for smaller organisations in priority areas who do not have their own training teams.

Picture: Avoiding terror – the NPCC is launching an initiative to involve staff and businesses in combating terrorist attacks

Six Security Measures To Ensure A Safe Return To Work┬Ā

What To Consider Whilst Buildings Are Temporarily Unoccupied┬Ā

All Round Security (ARS) has announcedŌĆ» the appointment of ŌĆ»Lee Parker to their board of directors, joining them as an ŌĆ»equityŌĆ» partner.  Parker joins ARS...