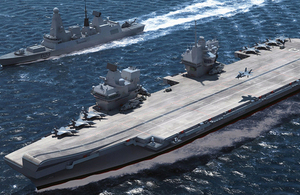 Exactly a week ago (Friday January 30), Chancellor of the Exchequer George Osborne announced £100m of infrastructure development in new dock facilities at Portsmouth Naval Base will support the arrival of the Queen Elizabeth Class Aircraft Carriers - as part of a plan 'to build the most modern navy in the world'.

Osborne also announced a new national shipbuilding strategy in advance of  this year's election which would include orders for the brand new Type 26 Global Combat Ship (to be based in Portsmouth and Plymouth) if the Conservatives are re-elected. Warship production, he said, will help maintain jobs, provide new apprenticeships, and develop advanced engineering skills - whilst providing an export capability.

The £100 million of infrastructure development will encompass berthing and jetty improvements, new power supply and distribution and significant dredging in the approach to the harbour to enable the base to accommodate the largest warships ever built for the Royal Navy.

In defence of the realm and the realm of the developer

Meanwhile, the Defence Secretary, Michael Fallon, (on the previous Wednesday) said the Ministry of Defence will have to dispose of more and more building assets and land to make ends meet. He said the money would be put into funding front-line troops. Land and property sales have brought in £380 million as polo fields, country houses, the Old War Office in Whitehall and even Brompton Road Tube station (closed in 1934 but 'acquired' by the MoD for WW2 duty) has seen property developers cash in. Defence spending has not so far seen a £380 million windfall.

Fallon has, it seems, identified  at least 57 sites within the M25 alone as he asks the question: "How do we go further in rationalising our defence estate?" Amongst the sites earmarked nationally are sports facilities (including 15 golf courses) which house-builders are eyeing jealously.

Vernon Coaker (Labour's Shadow Defence Secretary) said he and his party would welcome the sale of more assets in the mistaken belief it would generate funding for the armed forces rather than disappearing into a £38 billion MoD budget deficit.

Fallon told his audience: "We own 1% of the UK landmass, our budget is £34 billion, we have assets worth £120 billion, we have a quarter of a million strong workforce and more than 4000 separate sites. If the MOD were a listed company it would easily be placed towards the top of the FTSE 100.

"We’ve seen sponsored aggression by Russia in Crimea and Ukraine. We’ve seen non-state actors like ISIL and Boko Haram attempting to usurp existing territory. We’ve seen Islamist terrorists striking in Canada, Australia, Pakistan, Brussels and Paris. These uncertain times underline why the defence of the realm is the first duty of Government. Agile, well-equipped, Armed Forces, properly funded, are not a luxury but a necessity.

"We have a challenge to maximise our assets. Our blueprint has seen:

"We devolved budgets to frontline commands - meaning the Service Chiefs effectively became Chief Executives of multi-billion pound organisations. Three of them now based with their commands rather than at head office. And with far greater control over spending and how they meet their outputs they now have a vested interest in knowing the cost and the value of everything.

"Some areas of activity – such as the delivery of military force – are kept within the public sector for good reason. But it is often more effective - more cost-effective - to draw on the private sector to support our core activities. We brought in a strategic partner to get to grips with the sprawling defence property estate. This innovative contract will save a total of £3 billion over its ten year lifetime. We’re already seeing wholesale changes to the way we occupy space. We’ve collapsed 3 buildings in London into one, savings millions in running costs and releasing the Old War Office for redevelopment. And we’re not immune in Main Building from this since we now plan to share part of the 626 thousand square feet of MOD’s main building with other parts of Government.

By concentrating resources around a significantly smaller estate we can deliver improvements as well as releasing land and buildings for housing and commercial use.

"One area I am focused on is where we have to award contracts without competition either for national security reasons or because there is essentially only one supplier. We spent around £6 billion a year in this way.

That’s why we’ve now set up the Single Source Regulations Office as an independent regulator to implement the legal framework that came into force in December to ensure that our contracts do deliver value for money. And I will be setting out further thoughts on how to encourage companies to think of themselves as partners rather than suppliers in the coming weeks.

"We’re looking to bring in commercial partners to this year run our military port Marchwood and to run and operate our pipeline and storage system. We plan to announce the preferred bidders by the end of March."