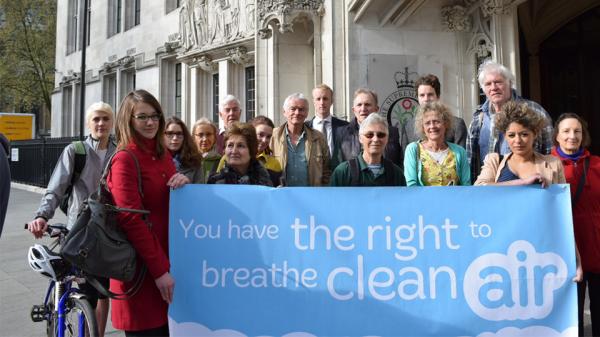 ClientEarth is a high-powered group of environmental lawyers and activists. They say a High Court judgment delivered on Wednesday July 5 on air pollution is a 'shot across the bows' of a government failing to meet its own commitments on air quality throughout the UK.

ClientEarth CEO James Thornton said it was a clear signal to ministers that they must improve on their draft plans to reduce air pollution as soon as possible. ClientEarth had brought the case to challenge the government’s draft air quality plans released on May 5 (a previous ruling had not allowed the plans to be delayed until after the election).

In his judgment, Mr Justice Garnham said that there was nothing unlawful about the government’s draft plans but suggested that final plans could well be open to legal challenge if they do not deal with some of the concerns laid out.

ClientEarth believes the plan for England is fundamentally flawed. It was Amber Rudd, Secretary of State for the Environment Food and Rural Affairs (DEFRA) who stood accused of failing to comply with a previous court order to produce a plan to bring air pollution across the UK down to within legal levels as soon as possible. It was also argued that the draft, sets out no evidence of any plans for concrete actions in Scotland, Wales and Northern Ireland. The lawyers had written to DEFRA asking for the draft plans and consultation to be supplemented but had their request rejected by the department.

ClientEarth CEO James Thornton said: “The draft plans for Scotland, Wales and Northern Ireland are plans for more plans. The court ordered a plan for the government to obey the law on pollution limits as soon as possible. The health of all UK citizens is at stake here but the government is not acting accordingly.”

It was also stated in court that the government has rejected the concerns of more than 11,000 people who responded to its draft air quality plans, claiming it only received 747 responses. ClientEarth and other groups helped more than 11,000 people fill in a consultation on the plans through an online form. In its submissions to the High Court the government revealed that it would not count those as consultation responses.

The government’s own technical analysis shows that charging drivers of certain vehicles to enter polluted areas of towns and cities is the most effective way to bring down air pollution as soon as possible.

The court made it clear that any alternative measures would have to be equally or more effective than a charging CAZ in meeting the air quality limits and reducing people’s exposure to pollution.

Thornton said: “We are shocked that, on an issue which blights the lives of thousands across the country, the government is refusing to listen to the views of the people by ignoring 11,000 responses to their consultation. We hope that their final plan reflects the concerns of everyone affected by this public health crisis.

“We look forward to the final plan on 31 July. In our view, the judge made it very clear that the Government must meet very specific criteria in order to avoid any future legal challenge."