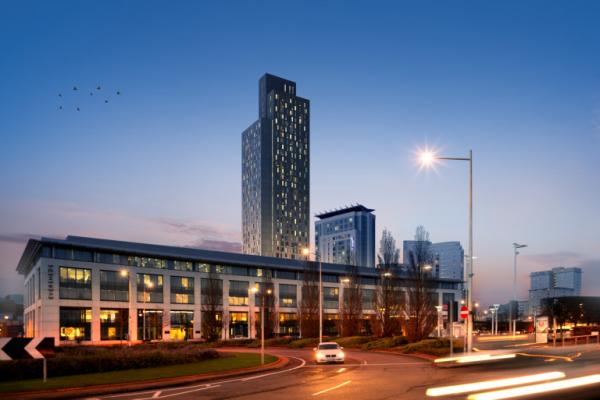 This has been a busy period for the Bangor based Watkin Jones Group with two major contracts and a flotation announced.

The Welsh developer and builder has been granted planning for a 42-storey tower of student flats in Cardiff, a development in Belfast and its intention to float the company next week.

The Cardiff development will involve a 132m-high tower of student rooms approved for construction on what is now derelict land near Customhouse Street in the city centre. Watkin Jones believes it will be the tallest building in Wales, beating Swansea’s Meridian Tower which is 107m-high. Work will start later this year with a completion date of 2018.

The block is to be under the operational control of Fresh Student Living, a business that has ties to the Watkin Jones Group and will have 447 rooms for students and is claimed to be the builder’s most ambitious scheme to date.

Good news for the specialist builder also came at the start of this week with planning approval for a development on Dublin Road, Belfast. The scheme will comprise 156 studios and is located a short walk away to the Queen’s University Belfast campus.

After a number years of strong growth, primarily in the student accommodation market in the UK, Watkin Jones has decided to float the company on the Alternative Investment Market (AIM) hoping to raise in the region of £300 million.

“The team has worked hard to establish our position as a leader in the UK student accommodation development market and it is this ability and ambition that will allow us to capitalise on the significant opportunities ahead,” explained Mark Watkin Jones, CEO, Watkin Jones. “The PBSA market in particular has huge potential and is supported by a number of long term growth drivers. We look forward to continuing to expand our business, providing an end to end service for accommodation projects as a publicly quoted company.”

Picture: A major contract has been won by Watkin Jones for student accommodation in Cardiff

Kier has been awarded the contract to design and construct a 22-storey building that will be the tallest building in Plymouth. Standing at 78m high the student...