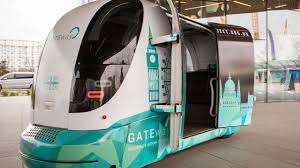 The GATEway project has seen a driverless shuttle bus take its first passengers in Greenwich (London).

The Chief Executive of the Royal Borough suggested that the launch event garnered more attention for the Borough than the 2012 Olympic Games.

As part of the project, GATEway will be trialling and validating a series of different use cases for automated vehicles. This will involve live trials of highly and fully automated vehicles and simulator testing. The first live running required a substantial 3D mapping exercises around Greenwich to help assess and plan the different routes and create a reference point for the shuttle vehicles to use for navigation and a thorough review to ensure potential risks were satisfactorily mitigated.

Drivers of the driverless

For about three weeks before, during and after Easter, about 100 passengers overall - from the 5,000 that applied to have a go - will get to ride the shuttle at speeds of up to 10MPH - all under the watchful eye of the man or woman controlling the computer and safe in the knowledge that a driver will be on-board...but only touching the controls in the event of an emergency.

Five cameras and three lasers will also be deployed as the prototype shuttle, which actually only seats four people at a time, travels its two mile route.

Philippa Oldham, Head of Manufacturing and Transport at the Institution of Mechanical Engineers, said: “This new shuttle bus is exciting news for London and the UK more generally. This trial has been set up to engage with the public, seeking their views on what they would like from this new mode of transport in terms of its look, feel and accessibility. Addressing how comfortable they are travelling in a vehicle that ultimately will not have a driver.

“The benefits of driverless vehicle technology are huge as it could lead to fewer accidents. Statistics tell us that 95% of vehicle accidents are the result of human error so it makes sense to look at how we can use this new technology to help save lives.

“If we truly want the UK to become a world leader of driverless vehicle technology we need to get communities on-side and championing projects like this is a step in the right direction."

Picture: All new transport methods have to start somewhere - two people will control a shuttle bus service for four people along a two mile stretch of path by the River Thames in Greenwich