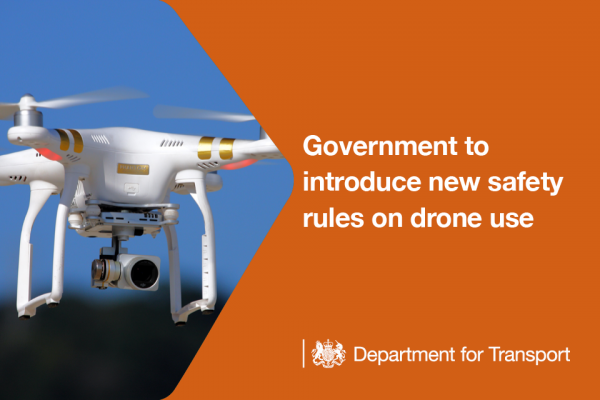 Drones will have to be registered and users will have to sit safety awareness tests under new rules to regulate their growing use, the government announced on July 22.

Owners of drones weighing 250 grams and over will in future have to register details of their drones to improve accountability and encourage owners to act responsibly.

Users may be able to register online or through apps, under plans being explored. In addition, a new drone safety awareness test means owners will have to prove that they understand UK safety, security and privacy regulations.

Drones represent an exciting opportunity for the UK, are already of substantial benefit to business and can help boost safety, improve inspections aid the emergency services and even be utilised for deliveries. The government plans to bring forward and expand the use of ‘geo-fencing’ in the UK that acts like an invisible shield around buildings or sensitive areas. The technology, which works on GPS coordinates, is built into the drone and stops it from entering zones such as prison or airport space.

Devon & Cornwall and Dorset Police have become the first police forces in the UK to launch a fully operational drone unit. The latest in drone technology has been trialled in the respective forces since November 2015 and such has been their benefit, an operational drone unit has been created. Chief Superintendent Jim Nye, Commander for the Alliance Operations Department, said: “This technology offers a highly cost effective approach in supporting our officers on the ground in operational policing. Drones will aid officers as part of missing person searches; crime scene photography; responding to major road traffic collisions; coastal and woodland searches and to combat wildlife crime.

“Drones can even help police track and monitor suspects during a firearm or terrorist incident, as it will allow officers to gain vital information, quickly, safely and allow us to respond effectively at the scene."

The government worked with the CAA to develop a new drone code launched last year which has 6 key principles:

DJI, a world leader in civilian drones and aerial imaging technology, has said the United Kingdom Department for Transport’s new plans for drone registration and other systems to ensure drones are safely and responsibly integrated into British airspace, are sensible.

“Drone technology offers enormous benefits to the UK, and the Department for Transport’s proposal appears to strike a sensible balance between protecting public safety and bringing those benefits to the UK’s businesses and the public at large,” said Brendan Schulman, DJI Vice President of Policy and Legal Affairs. “DJI has invested heavily in adding safety features, and we expect the government to work closely with industry leaders to ensure progress and promote technological innovation. We are encouraged by the fair and thoughtful approach the government has taken to date. The key will be maintaining this balance in the next round of deliberation.”

Fingers almost cut off by a drone

James Andrews told the BBC this week that his first drone flying experience nearly cut his fingers off and almost blinded him. "It all happened so quickly. I didn't realise what it could actually do," James, 43, told the BBC. James, who lives on the outskirts of Radstock, Somerset, went to spend the day with his friend at Monmouth Beach, Lyme Regis. His friend, who owned the drone, had taken a few safety lessons but it was the first time they had tried it solo. "The landing gear wasn't coming down. It was hovering just over two metres from the ground. So I went to grab it so my friend could turn it off," said James. "I held it for about six seconds until all of a sudden, the landing gear came down on my fingers. I immediately let go and then it hit my arms and face. I could see the tendons in my right thumb and the deep cuts on my arms."

"I was taken to hospital where the doctors operated to make sure my tendons and muscles weren't severed and stitched me back up. The drone also hit my eye and I was very close to losing my eyesight," James added.

Findings by the Department for Transport (DfT), British Airline Pilots’ Association (BALPA) and the Military Aviation Authority (MAA) published today in a summary report, reveal drones weighing 400 grams could damage the windscreens of helicopters in particular. However, airliner windscreens were found to be much more resistant. It would take a heavier drone of around 2 kilograms to critically damage an airliner windscreen, and only if the airliner is flying at a high speed; not during take-off and landing.

Road users will benefit from an investment of almost £200 million to help improve the condition of local roads up and down the country, Transport Minister Jesse...

You get Less of an Ooh with Typhoon

The massive US Consumer Electronics Show 2016 has been awash with many technological wonders and one of them is a drone that can avoid objects without the intervention of...