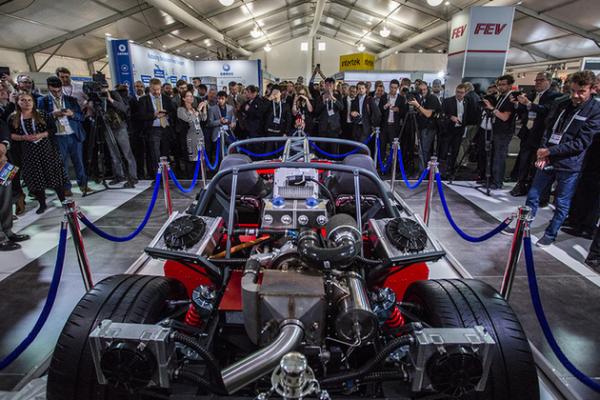 November 1 saw the Royal Automobile Club announce that the recipients of the Dewar Trophy and Simms Medal for 2017 are Jaguar and the HiperCar Consortium respectively.

The Dewar Trophy and Simms Medal are only awarded in years when the Royal Automobile Club’s Dewar Technical Committee deems there have been contenders of sufficient merit. And 2017 is one such year.

The Dewar Trophy was presented to Jaguar Land Rover Chief Executive Officer, Dr Ralf Speth, for his team’s design and development of the first all-electric Jaguar - the I-Pace Concept. Arriving on the market in production form in 2018, the I-Pace packs an electric powertrain inside a dramatic new body, signalling a new direction for the marque.

Featuring two ultra-compact electric motors and a high-tech Lithium-ion battery with a capacity of 90kWh, the I-Pace delivers 700Nm of torque and 400PS. That performance is distributed to all four wheels and 0-60mph takes only around four seconds. Its range is also highly impressive: more than 500km (310 miles), while an 80% charge takes just 90 minutes with a 50kW DC rapid charger.

The firm’s engineers have positioned the Lithium-ion battery pack low in the chassis for a low centre of gravity, while the battery itself is encased in an aluminium shell that forms part of the car’s structure. It’s also thermally managed by a liquid circuit, which cools or warms the cells according to the ambient temperature, ensuring optimum efficiency and performance.

With a flat floor and no internal combustion engine at the front, Jaguar’s design team, led by Director of Design Ian Callum, has been able to give the Pace a shape that is more cab-forward than any previous Jaguar.

In the past, small niche vehicle manufacturers, especially in the high performance sector, have often come up with exciting concepts for new vehicles but then struggled to turn that vision into reality. Ariel has a reputation for producing radically different high performance vehicles and bringing them to market - such as the Atom and Nomad. In developing its next product line and in search of even more extreme performance, as well as a desire to reduce emissions, Ariel realised very quickly that such a vehicle could not use a conventional powertrain.

To deliver this vehicle, known as HiperCar (which stands for High Performance Carbon Reduction), Ariel came together with Delta Motorsport and Equipmake to form a consortium to meet performance and emissions reduction targets, while also addressing real world customer needs, the package chosen was a range extended, battery powered electric vehicle.

Supported by a grant from Innovate UK, the consortium has delivered the first example of HiperCar in just 24 months: a four-wheel-drive range extended electric sports car, using a novel gas turbine range extender, with an overall power output of 1080bhp.