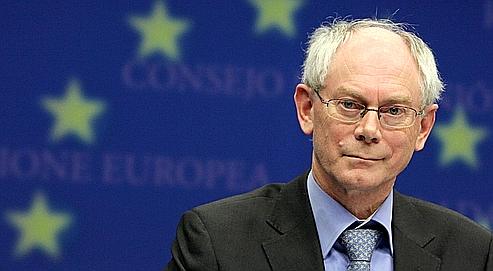 In the early hours of last Friday, EU Leaders agreed to further cuts in CO2 emissions - 40% by 2030, compared with 1990 levels - with the EC President Herman van Rompuyj (pictured) claiming an 'ambitious and balanced' accord despite the attempts by various individual countries to protect their own national interests (with the expansion of the EU has come a greater number of countries that still rely heavily on coal).

The agreements are said to be 'binding' - but we know that one politician's 'binding' is another's 'put that off until tomorrow and we'll argue it or get an extension nearer the time'.

The use of renewable energy and a drive forward in forcing business and domestic clients to be energy efficient was also agreed. By 2030 European nations should see 27% of their energy coming from renewables. The figure for energy efficiency was also set at 27%.

Van Rompuy, said poorer EU members would get funding to help reach the targets particularly with regards to renewables. The UK objected to the renewables targets as it wants to drive investment towards shale and nuclear. Despite this, Energy Secretary Ed Davey said: "Europe has sent a clear and firm message to the world that ambitious climate action is needed now.

"It's good for consumers because we can decarbonise at the lowest possible cost using a diverse mix of technologies. And it's good for business as it provides the certainty they have been calling for to unlock billions in low carbon investment."

The UK Green Building Council has responded to the announcement on the EU climate targets. John Alker, Director of Policy and Communications said: "Having committed to an ambitious carbon reduction goal, it would have made sense to give ourselves the best chance of meeting that cost-effectively - with an equally stretching and mandatory energy efficiency target, both at EU and member state level.

"Sadly, an opportunity to give a much needed boost to low carbon business across Europe has gone begging. A destination has been set but we are effectively setting off on the journey with no map and no guarantee that we will actually get there."

The full text of the agreement can be read here:

In an initial ruling, the European Commission (EC) found the UK is not enforcing laws that require Energy Performance Certificates (EPCs) to be filed for all buildings...