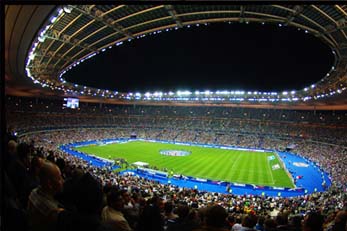 The State Department issues warnings to Americans about the potential for terrorist attacks at major events, tourist sites, restaurants, commercial centres and transportation for areas where terrorism has become 'normal' but only three times in 20 years have the alerts covered Europe. The most recent has highlighted the Euro 2016 football (or soccer) tournament.

The current warning says the large number of tourists visiting Europe in the summer months will present greater targets for terrorists planning attacks in public locations.

It reads: 'France will host the European Soccer Championship from June 10 – July 10. Euro Cup stadiums, fan zones, and unaffiliated entertainment venues broadcasting the tournaments in France and across Europe represent potential targets for terrorists, as do other large-scale sporting events and public gathering places throughout Europe. France has extended its state of emergency through July 26 to cover the period of the soccer championship, as well as the Tour de France cycling race which will be held from July 2- 24.

'The Catholic Church’s World Youth Day event is expected to draw up to 2.5 million visitors to Krakow, Poland, between July 26 and July 31. Poland will impose border controls at all of its national borders from July 4 to August 2, and visitors to Poland during this period should be prepared to show their passport and undergo stricter security screening throughout Poland.

'European authorities continue to take steps to assure public safety and disrupt terrorist plots. We work closely with our allies and will continue to share information with our European partners that will help identify and counter terrorist threats'.

The State Department's offers a Smart Traveler Enrollment Program to both U.S. citizens and those of other countries to send alerts and make it easier to locate users in an emergency. Call 1-888-407-4747 toll-free in the United States and Canada or 1-202-501-4444 from other countries or Click Here

According to UEFA the 51 matches at 10 different venues will attract 2.5 million spectators with 1 million coming from other European nations. 90,000 security staff will be deployed.

England have selected the county's best players along with Jordan Henderson and Jack Wilshire to form squad capable of getting to the Final.

The UK Foreign Office will issue similar alerts to UK citizens. Guidance is expected soon with regards to France Euro 2016 but none is available on the UK Foreign Office website. The only current guidance reads: 'There is a high threat from terrorism. Due to ongoing threats to France by Islamist terrorist groups, and recent French military intervention against Daesh (formerly referred to as ISIL), the French government has warned the public to be especially vigilant and has reinforced its security measures.

'While there continue to be large numbers of illegal migrants in and around Calais, who may seek to enter the UK illegally, the security situation has improved significantly since the summer of 2015. Although the risk of incidents has decreased, you should keep vehicle doors locked in slow moving traffic in and around Calais and secure your vehicle when it’s left unattended'.

Picture: With thanks to Stade de France - a previous terrorist target

Large phones, laptops and tablets not allowed in the cabin on flights to the UK from Turkey, Lebanon, Egypt, Saudi Arabia, Jordan and Tunisia. On Tuesday March 21 the...

According to the BBC this week, Paris has taken a huge hit this summer in tourism numbers as has France as a whole because of fears of terrorist attacks. A million...

Teresa May - Attack in the UK is Highly Likely

In what was the third time in her career she has stood before the Commons following a terrorist attack on the soil of a British ally, Teresa May said the UK stays on a...

The efforts of two members of staff a security team have recognised by British Land. Charles Nyeko and Mohammed Hamza Dhimen were recognised for going the ‘extra...

Canada, which has joined the US and UK in targeting IS in Iraq, has a growing problem with 'Muslim' extremism and the threat of guerrilla attacks such as the lone...