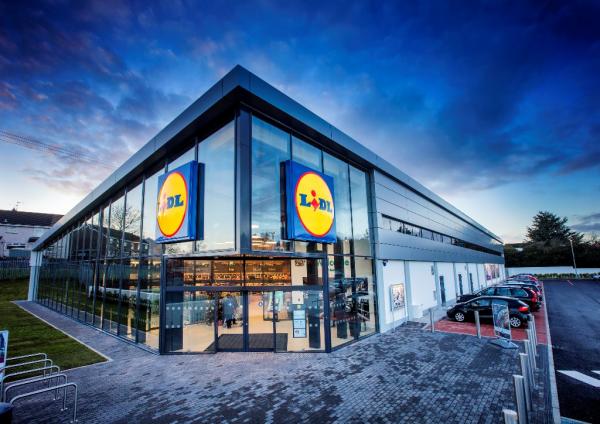 The German owned Lidl supermarket group has opened its first new concept shop in Northern Ireland that has a state-of-the-art energy efficient building including curtain walling that helps to meet green criteria.

With the first concept store in mainland Britain also now open in Rushden, Northamptonshire, Lidl intends to refit 150 of its 629 stores over the next three or four years.

The modern facility in Banbridge, Co Down will, according to the German supermarket, ‘ensure a greater focus on energy efficiency with a reduction of around 20%-30% on standard electricity costs’.

With what it describes as ‘an extremely limited delivery schedule’, Wrightstyle supplied 220sqm of fire rated curtain walling to its customer Lynch Windows of Co Donegal for the external glazed facade of the 3,000sqft facility. The glazing elements were fixed in a double format mullion configuration to meet aesthetic requirements and were required to ‘seamlessly integrate’ with other non-fire rated screens.

The ‘green’ credentials of the store extend inwards from the external glazed elements with for example, warmth from refrigerators being recycled.

“We were delighted to supply to this new supermarket because it underlines how glass and glazing systems can play an important part in energy conservation, both by letting heat from the sun in, and preventing it escaping,” explained Lee Coates, Technical Director, Wrightstyle. “Importantly, while our systems can effectively and cost efficiently help to regulate internal temperatures inside large offices and retail facilities, they do so without compromising on their primary safety functions.”

Picture: All in the concept with the latest Lidl retail outlet in Banbridge, Co Down possessing efficient aspects including the curtain walling supplied by Wrightstyle